Doctor Who - Synopsis For Criss - Cross 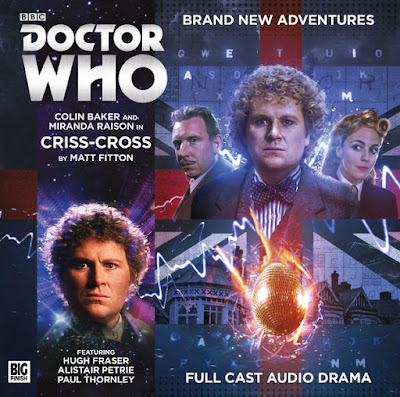 The second Main Release features the 6th Doctor and his new companion Constance Clarke. This new mini series can be ordered from the Big Finish website.
http://www.bigfinish.com/releases/v/criss-cross-876

Inside draughty huts, the earliest computers clatter day and night, decoding enemy transmissions and revealing intelligence crucial to the country's defence. Leading WREN Mrs Constance Clarke directs her charges to provide vital assistance to the boffins stationed in the Manor House. But a recent arrival among the code-breakers, the mysterious Dr Smith, has attracted the attention of MI5's spycatchers...

Over in mainland Europe, Nazi agents are briefed, covert operations planned, and a German submarine embarks on a very secret mission.

As encrypted radio waves criss-cross the planet, unearthly forces stir. And when certain ciphers are cracked, something will emerge to threaten all humanity, regardless of allegiance...