Doctor Who - Genesis of the Daleks Review 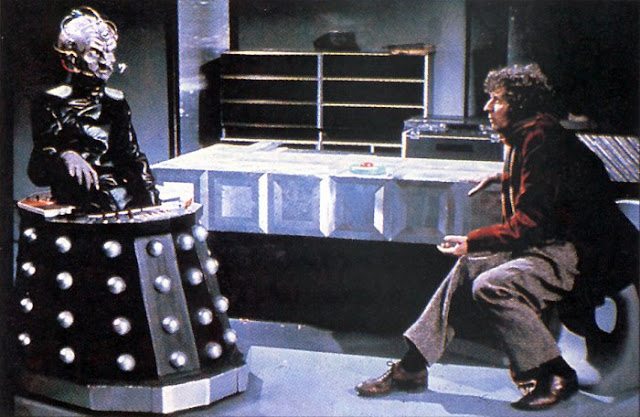 Doctor Who:
Genesis of the Daleks
By Terry Nation

“Do I have the right? Simply touch one wire against the other and that's it. The Daleks cease to exist. Hundreds of millions of people, thousands of generations can live without fear, in peace, and never even know the word Dalek.”

The Time Lords have diverted The Doctor, Sarah and Harry to Skaro for a mission of utmost priority. The Time Lords see a time where the Daleks will have destroyed all lifeforms and have become the dominate creature in the universe.  The Time Lords want The Doctor to prevent their creation or affect their genectic development so that they evolve into less aggressive creatures.

The Doctor, Harry and Sarah have been separated.  Sarah is captured by the Thals and put to work on their rocket while Harry and The Doctor have been captured by the Kaleds.  The Doctor and Harry are being intergraded and end up meeting Davros.  Davros is talking to the other scientist and introduces to them to the Mark 2 traveling device.  The Doctor explains to Harry that it is in fact a Dalek.  The Doctor also explains to Harry that they have to stop Davros from creating the Daleks and must do whatever they can to prevent Davros from being successful. 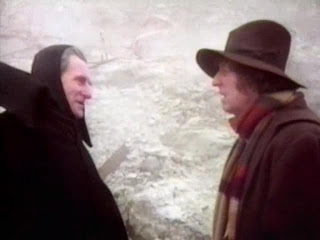 Genesis of the Daleks is one of the best Dalek stories ever if not the best one.  Plain and simple we witness the creation of the Daleks and the lengths its creator Davros would go to get them made the way sees fit.  He goes as far as giving the Thals the formula for the Kaled dome to weaken it so that the Thals rocket can destroy the Kaled city.  Davros goes as far as killing his own people to get his Daleks made.   Terry Nation creates Davros and creates on of the evilest characters in Doctor Who history.  All you have to do is watch Genesis of the Daleks and just see how maniacal and plotting Davros really is.  He is the most dangerous in this story and he isn’t the same in the four stories that come after this one.  Davros is just portrayed as being crazy with whacked out plans in the later stories but in Genesis of the Daleks he is a lot more dangerous and one to be feared. 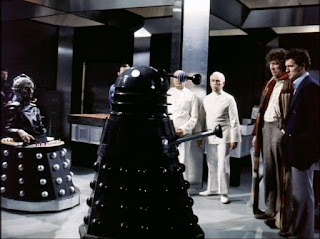 Terry Nation uses on of Classic Who’s formula for writing a story.  That formula is getting captured, escape, wash, rinse and repeat.  For most of this 6 episode story the three main characters get captured a lot.  But that is part of the charm because we find out a lot about Davros and the creation of the Daleks with The Doctor being held captive and being interrogated.  One of the best moments is when Davros is innterograting The Doctor to find out about all of the past defeats of the Daleks.  He wants to program these into the Daleks so they will not be defeated.  Purely ingenous and adds another wrinkle to the story as we need to see The Doctor get that tape and destroy it. While Sarah is really a throw away character in this story she does have some good moments while being captured by the Thals.  She befriends one of the mutants and tries and leads them to escape the Thals.  This is classic Sarah Jane as she was always the companion to take the imitative and try to do something instead of waiting for The Doctor to save her. 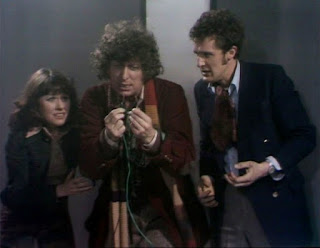 Genesis of the Daleks was my first Dalek story. This story introduced me to the Daleks and I was lucky that my first one was their origin story.  So each Dalek story I watched afterwards I had a pretty good understanding of what made them tick and was able to enjoy the story more knowing what I knew on the first time around of watching Doctor Who.  It also blew my mind as Genesis of the Daleks is a true science fiction story with so many moral themes in it like what right did the Doctor have to prevent the Daleks from existing.  That was one of the best scenes ever as you see The Doctor talking to Sarah and second guessing himself if he should do it.  He gives plenty of reasons for and against but in the end he eventual does it.  But it only delays the inevitable as the Daleks wreak havoc across the universe in future stories.   There were lots of moral dilemmas for The Doctor and it also made you think what you would do if you were in The Doctor’s shoes.   Genesis of the Daleks is just classic storytelling at its best. 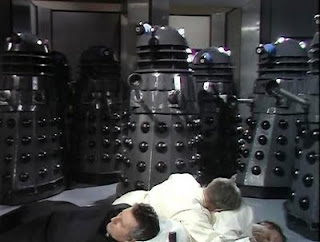 Even though Genesis of the Daleks is mainly a Davros story the Daleks have a main part towards the end as the show up to wreak havoc and be their evil self that we all know.  They even go as far as killing Davros the one who created them.  I really like this story even though it is six episodes it is still fun to watch.  Lots of gripping scenes like the mine field and the mutant clams in the tunnels.   Genesis of the Daleks is one of the greatest Doctor Who stories ever and new fans should take the time to watch this story now that it was featured in The Magician’s Apprentice.  Yes it is six episodes long but it is worth watching in one sitting.
Grade A