Doctor Who - Jenna Coleman on Series 9 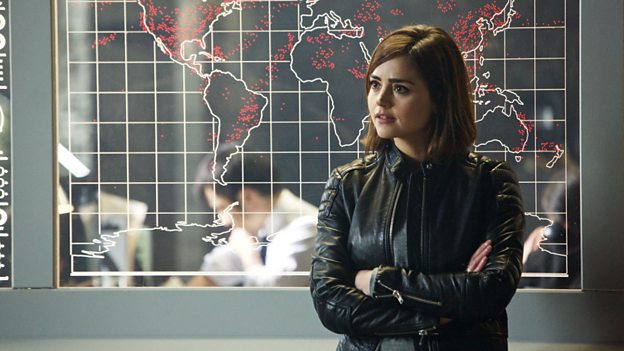 The third interview is with Jenna Coleman who plays The Doctor's companion Clara.  Her she talks with the BBC Media Centre about Series 9.

How are you feeling about this new series?

Really excited, a lot of the stories are self contained two-parters; it’s a lot more space-bound and it’s all about adventures and time travelling. The amazing benefit of doing them is not only do you get more time to explore the story, but also at the end of the first part you get to create a huge cliffhanger. Clara and the Doctor are united, they’re strong together and are just enjoying travelling and doing and seeing as much as possible. It’s very adrenaline-fuelled and full of reckless adventure, with them throwing themselves head first in to it.

Clara seems to be more determined and focused on time travelling, do you see that she’s moved on since the last series?

She’s cutting ties with earth more and more. Since losing Danny her perspective has changed on life and in a way she’s lost fear of her own mortality. When that happens there’s a sense of freedom - going into adventures there’s nothing holding her back. But as much fun as it is, it can be dangerous - I think there’s definitely something in that for Clara, in losing herself.

It seems like the Doctor and Clara are more alike than ever before, would you say that’s true?

There’s an ease between them, a shorthand, and she is becoming more and more like him. I think they’ve always been a lot more similar - perhaps other Doctors and companions have been. I think she quite wants to be like him, but the more time they spend together the more doctorly she’s getting, and more independent of him. There are quite a few stories in this series where you see us parting ways, where we’re covering different bases, and then you see us coming back together - they’re a proper team. I think they’ve been through so much together and they know each other so well that they’re entwined.

Working with guest cast in each block, how does the dynamic change on set for yourself and Peter?
The two of us are always behaving as stupidly as we do, and it’s been lovely having Michelle back, she’s always a laugh. Maisie is wonderful, I was a really big fan of hers before she came to Doctor Who, she fits right in so it’s been really great having her join us. One of the most wonderful things about the show is every episode feels so different, it feels like a whole new show in a way.

What has been your favourite episode from this series and why?

Episode 11 will be really unique and the Viking episode was so much fun to film. The scripts for episodes 7 and 8 are really strong, Peter Harness has done such a good job with those. They feel like quite different Doctor Who episodes - tense, very relevant, thought-provoking, and clever.

You have great looks this series - do you have any input in to what you wear?

My idea for Clara is very much a school teacher who rides a motor cycle, in a retro 60s style, but also sci-fi. The aim was to merge all those elements together for Clara’s look.

In episode 1 the Doctor is lost and you’re contacted by your greatest enemy Missy. How do Clara and Missy work together to save the Doctor without killing each other?

The peril that the Doctor’s in is so great that the only thing to do is to put differences aside and work together. I think in a way, Clara’s quite fascinated by Missy, but disgusted at the same time. That’s partly to do with how Michelle Gomez plays her, she’s so magnetic that you can’t help but like her, even though you’re supposed to hate her. It’s one of the really clever things she does. Clara and Missy actually end up getting on, but remembering they don’t like each other again.

Having two females that are very close to the Doctor is interesting for Clara to witness, because the Doctor and Missy are enemies, but they are also very ancient friends. They have a past and history that they cannot even touch upon, or even understand how you can like or be in love with somebody that has repeatedly tried to kill you throughout time and space.

I also think it’s interesting for Clara to operate under a female Time Lady, she’s so used to running with the Doctor that to be with a time lady is quite a new experience for her. Somebody who is so maniacal is quite fun. You think you’re safe and within 30 seconds you’re literally being pushed down a cliff.

You’ve done a few stunts in the series - can you tell us about them?

I’ve done a lot of hanging upside down this series! Upside down on a cliff in Tenerife was new, but surprising, it looks so easy but it’s not at all. It was tricky because we could only do it in minute spurts, filming the scenes. I also had a scene where I was hanging outside of the TARDIS too, so it seems to be one of my specialities this series.
Posted by DR5WHO at 10:13 AM