Doctor Who - Michelle Gomez On Missy and Series 9 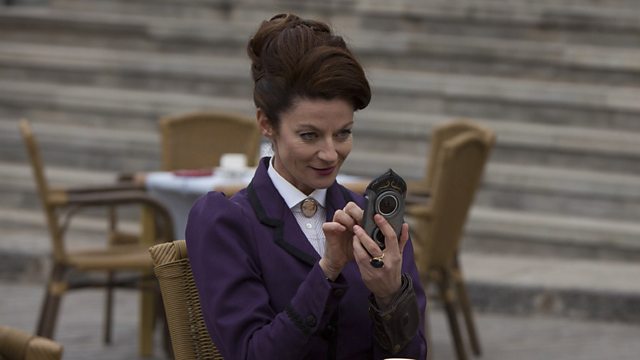 The second of four interviews from the BBC Media Centre for Series 9 of Doctor Who and today it is guest star Michelle Gomez talking about Missy.  Series 9 airs on September 19th.

You’ve re-joined the Doctor Who cast and reclaimed the role of Missy for series 9, what was it like being back on set?

It felt so good, especially as I thought it was all over for Missy at the end of series 8. But then of course she is The Master after all, so anything can happen, even dodging death. I'm still in a state of shock at actually being in a show I watched avidly as a child.

How did you feel when you were asked to return?

I was thrilled to be asked back, it's not every day one gets to travel through all of space and time. When they asked me I didn't have to think too hard about it, and I'd say yes again if it came to it. But nothing's a guarantee so I'm aware this year might be her last. But I sincerely hope not.

You appear in the opening episodes with Clara...

The dynamic between Missy and Clara takes on a whole new shape, and not one I had imagined. There is something not quite right about it that makes for slightly unnerving viewing. Missy gets bored very easily, you can imagine her and the Doctor in the classroom. She's using her intellect even then to cause mischief and disrupt.

Tell us about your relationship with Clara in these episodes?

Our relationship shifts greatly from where we left off in the last series. Dare I say there might be a hint of respect there? Perhaps not quite respect. More a healthy dose of circumspect, from both I guess.

Shooting in a large cinematic location abroad in Tenerife, what did the location add to the scenes?

There’s a sense of opera about that strange volcanic landscape - grand and loud in its infinite vastness, which provided us with a perfect backdrop for our needs. It had a harsh but strange beauty, almost lunar. Which was kind of the point.

Tell us about your relationship with the Doctor in these episodes?

They are still opposite magnets, mostly repelling, but at times they also attract. There is an undeniable shorthand that comes with a lifelong friendship. A friendship that at some point went very wrong. They are both from the same place eons ago, so the weight of that history they share is the bedrock of their relationship.

Can you describe your character ? Tell us how she’s developed since series 8?

Missy is a force of nature. She is a fearless, slightly psychotic killer whom you can't help but like just a little bit. She's very honest in her role as The Master. This is how she sees it - they both kill. The Doctor feels bad about it, she doesn’t. To her the Doctor hides behind his remorse while she thrives in the power to destroy. She has many tools to do this but so far we have seen but a few. Reading minds, hypnosis and moving obstacles just by thinking about it are to name but a few. She doesn't bake much. Well, not in the conventional sense.

Currently the Doctor Who team have a strong Scottish feel with Peter, Steven and yourself as part of the crew. What feedback have you received from your home town?

Go Scotland! When asked recently what does Gallifrey look like, I replied ‘Glasgow’, I'm sure that went down a storm. I think they are very proud. It's a Scottish take over with Peter, Steven and I all from Glasgow. The Weegies will take over the world.

You live in New York and there’s a big Doctor Who following in America - are you recognised when you’re in the US as much as the UK?

I’d say around the same amount. Which is not much at all. Missy and I have a very different dress sense so the fact I'm not wandering around in full Victorian garb means I get to walk around pretty freely.

What do you think Doctor Who means for British drama and its identity overseas?

It’s a product that reaches across the seas and touches people across the world. It ignites their imaginations with brilliant storytelling that all the family can enjoy. There aren’t too many of those shows around anymore, which makes it all the more special.
Posted by DR5WHO at 9:21 AM