Doctor Who - The Claws of Axos Review 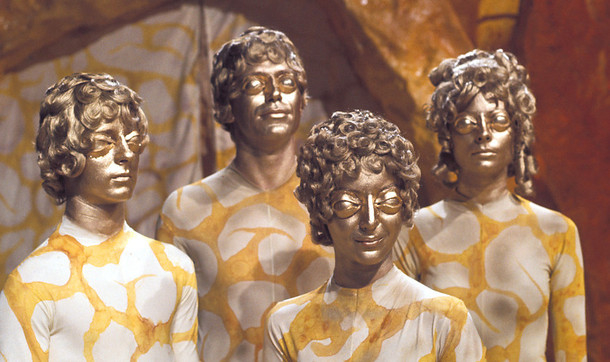 Doctor Who:
Claws of Axos
By Bob Baker and
Dave Martin

“The claws of Axos are already deeply embedded in the Earth's carcass! Soon it'll activate its nutrition cycle and the feast will begin. The Axonite'll cease to be dormant and it'll continue to grow, gentlemen, until every living thing is consumed.”

A space ship is heading to earth and UNIT is on alert.  The Doctor is curious of its nature but as usual he gets put off by the humans that want to destroy it.  In particular with a Mr. Chinn from the Ministry that orders a missile strike.   When that fails and the missiles given the abort order UNIT goes to the area where the ship has landed which is near a power plant. 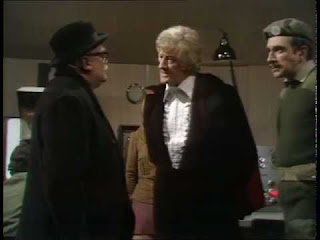 The group is allowed inside the ship where they are greeted by aliens in humanoid form but colored all in gold.  They are called the Axons and they have come to Earth to help us by offering us Axonite.  They claim Axonite can help Earth with their energy crisis and Mr Chin is just the greedy person that wants it at all cost even ignoring The Doctor’s warning.  The Doctor doesn’t trust the Axons and believe something else is their real motive is.  It is only when The Master shows up that things start coming into place and this isn’t the Axons helping Earth but using our power to get the secret of time travel to save their planet.

The Claws of Axos is one of those Pertwee stories that takes the events of the time, in this case the energy crisis, and uses it to make for a really good alien invasion story.   What also helped this story is the human greed factor.  Mr. Chinn was so desperate for the Axonite that it didn’t matter the risks where in front of him or the warnings that The Doctor gave the human politicians just so the monetary reward for having it and to keep it solely for Britain.  The Axons got this information from The Master obviously and used this information perfectly for their invasion as they knew this would happen.  The human greed made it extremely easy for the Axons to plant the seed for invasion that it really disgusted The Doctor. 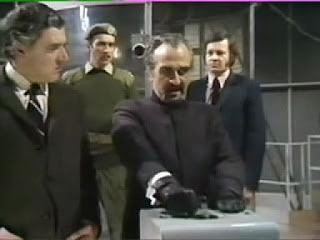 Which brings us to the fact that it appears that The Doctor gives the impression that he doesn’t want to help the earth.  It appears at times that he is content to leave us to our fate especially with the actions of Mr. Chinn and the Ministry.  Does he do this just to lull The Master and the Axons into a false security?  Perhaps but he does confess that if he was able navigate the TARDIS he wouldn’t have returned to Earth.  My opinion was that he was tricking The Master to fix the dematerlization circuit and his true intentions was to save the Earth and then leave and explore like he did before his exile.  Even still it was strange to see The Doctor act like this and have so much contempt for the human race but that is one of the traits of the Third Doctor and in Claws of Axos we see it tenfold. 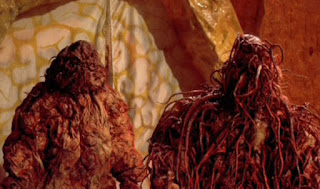 The Claws of Axos is the third story of season eight which is called The Master Season.  The stories in Season Eight are really good (well with one exception of one being mediocre) and Roger Delgado is The Master that all actors taking up the role will be judged by.  What makes Delgados Master so evil is that his Master is not a raving lunatic like the Simm Master and the Gomez Missy/Master.  He played the part straight and what made him evil was that he was so calm and cool and his plans were planned out to the final detail.  Plus he had great chemistry with John Pertwee and you can really see it in the Claws of Axos as the two complimented each other especially at the end when they were in the TARDIS planning a way to escape.  You just don’t have that anymore. 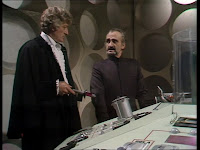 The Claws of Axos is classic Seventies Doctor Who with a story that is pure science fiction with a monster for the members of UNIT to fight at the end.  It is a story that showcases what happens when greed takes over and how gullible humans can make us when money is at stake.  The Claws of Axos is a pure classic story from the Pertwee era that still stands up today.
Grade A

Email ThisBlogThis!Share to TwitterShare to FacebookShare to Pinterest
Labels: 3rd Doctor, doctor who, jon pertwee, Roger Delgado, The Claws of Axos, The Master