Doctor Who - Terror of the Autons Review 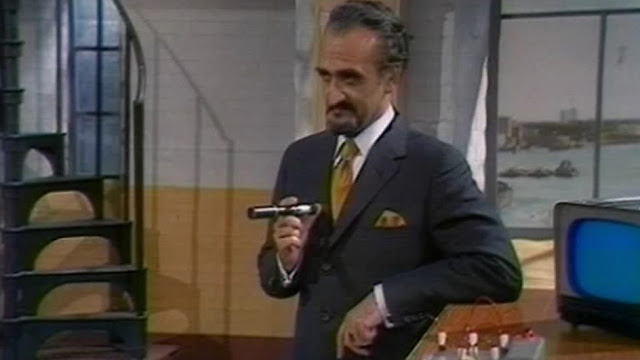 Doctor Who:
Terror of the Autons
By Robert Holmes

“You are incorrigibly meddlesome, Doctor, but we've always felt that your hearts are in the right places. But be careful. The Master has learnt a great deal since you last met him.”

There is a new threat for The Doctor.  The renegade Time Lord The Master has made his way to Earth to cause havoc and to take it over.  This time his allies are the Nestene and their plastic servants the Autons. In exchange for the power he craves The Master helps to hatch the Nestenes plan to take over Earth.  The Master has taken up residency in the plastics factory owned by the Farrel family.   The Doctor is warned about the Master coming to Earth by a pompous Time Lord who says The Master is not the same push over as before. 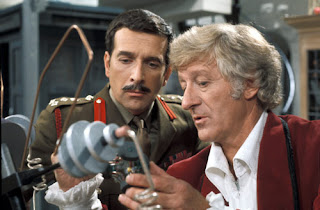 The Doctor also has a new assistant in Jo Grant who does not have the best of first days as she ruins the Doctor’s dematerialization circuit with a fire extinguisher and gets caught by The Master and hypnotized into killing The Doctor.  All this and killer daffodils that the Autons are handing out the public to help in the invasion plans as The Master sets things in motion for the Nestenes arrival.

Terror of the Autons starts off that love hate relationship fans have with The Master.  I for one like The Master in all of his incarnations but we all have to agree that Roger Delgado was the best of them all.  It was his presence and the way he conducted himself in the part that made you believe that he was evil.  He also had a charm also that made you like him and that is pretty devious also.  Roger Delgado was so perfect in the part and was really successful as The Master is the main reason that he has endured to present day as the main adversary for The Doctor. 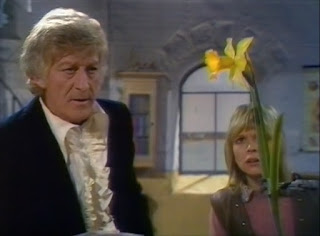 Robert Holmes crafts another gem for Doctor Who with this entry.  His story The Terror of the Autons has so many chilling moments.  Like the guy being eaten by the plastic sofa and the plastic doll killing Farrel.  Those scenes were pretty creepy and chilling that it made you think twice about certain things made from plastic.  What was also creepy was the doll like faces the Autons masks looked like.  When they were handing out those daffodils they looked really freaky and evil.

Terror of the Autons introduces us to a new companion Jo Grant played by Katy Manning.  Jo would end up being the main companion for the Third Doctor.   Jo doesn’t have a very good day but does come out in the end by being able to help The Doctor escape from the trailer.  Mike Yates made his debut also and UNIT has changed to their all green uniforms replacing the tan ones they wore last season. 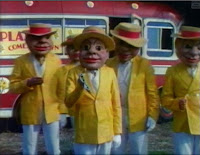 There wasn’t much that I did not enjoy in Terror of the Autons as I thought the story was pretty good and the performances were really good.  Sure the effects look dated but if you watch a show for the effects and not for a good story then well that is your loss.  The Terror of the Autons is a good start to season 8 and to The Master themed season and it sure picks up on the action that was surely lacking in season 7.
Grade B+