Doctor Who: Revelation of the Daleks Review 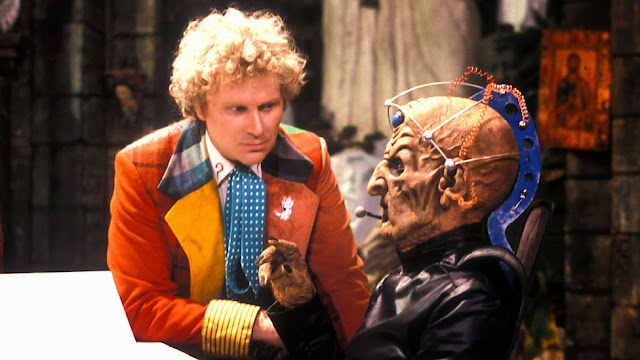 Doctor Who:
Revelation of the Daleks
By Eric Saward

“When you have become a Dalek, you will suffer for every indignity you have ever caused me.”

The Doctor and Peri have landed on Necros to go to the funeral of his old friend Professor Stengos. The funeral is being held at Tranquil Repose which is a place where people go to be frozen and then awaken when a cure for their disease is found.  On the way the pair is attacked by a mutant and tries to kill The Doctor before Peri hits him with a stick.  Before he dies the mutant tells The Doctor that the Great Healer has been doing experiments on him and others.

Unknown to The Doctor and Peri that the Great Healer is in fact Davros and he made the whole funeral for The Doctor’s friend to get him to Necros.   Davros is using Tranquil Repose for his own bidding as he is using the people in suspended animation to make a new type of Dalek.   Those that don’t work out he process them as food as another way to get funding for his new Dalek project.  The Doctor is starting to suspect something is not right with Tranquil Repose and once he is escorted to see the Great Healer and is greeted by Daleks it all makes sense.  Yet another encounter with Davros himself and this time Davros has the upper hand. 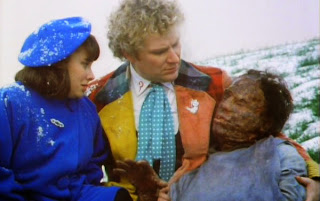 Revelation of the Daleks is more of a Davros story than a Daleks story.  For one they are not in it that much and only have a big presence in the last quarter of the story.  Yes we have the Imperial Daleks hanging around Tranquil Repose but they don’t really do much until the end when Davros orders them to capture Peri and kill the DJ where she is hanging out.  I liked this style of story as it is as close as we have gotten since Genesis of the Daleks to a standalone Davros story.  It is just mainly Davros using Tranquil Repose for his bidding and using Tasambeker to do his bidding by getting rid of Jobel.  He continues to use his powers of manipulation on Kara to use her company to distribute his version of protein and to get her money to fund his human Daleks.  You get a sense of how evil Davros can be by seeing this side of his character. 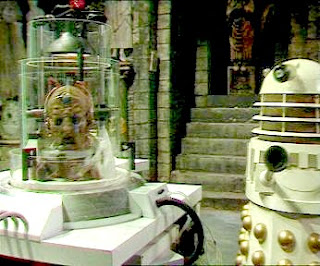 One of the coolest things about Revelation of the Daleks is the character of Orcini and his squire Bostock.  Orcini is a Knight of the Grand Order of Oberon and he was hired by Kara to kill Davros.  A kill like Davros would put Orcini back in favor with his order.  I like Orcini and wished there was more background on the Knights of the Grand Order of Oberon and it is too bad Big Finish hasn’t done anything with them as they seemed like an interesting group to explore more in stories with The Doctor.   An order of assassins that has a code of honor seems like an ideal cast of characters to use but I’m guessing it’s a rights issue so that is why they’ve never been used by Big Finish as they would definitely be something they would use. 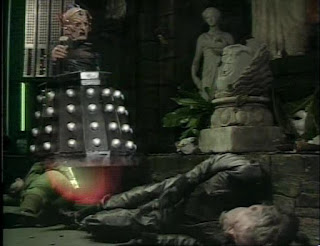 Colin Baker and Nicola Bryant are excellent in Revelation of the Daleks.  You can see the chemistry between them is really good and that the pair has really gotten in a groove working together.  Colin Baker looks really comfortable as The Doctor and you can tell that some of the gruffness has been toned down.  He really has gotten the knack of being The Doctor by now and it is great seeing his Doctor take charge and take on Davros.  The verbal battle between the two of them is really good and Colin’s Doctor uses just the right amount of sarcasm to make the exchange that more enjoyable. 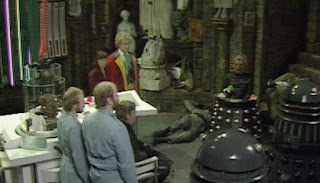 I like Revelation of the Daleks because it was different.  It is a story that doesn’t have the Daleks all over the place yelling exterminate every minute.  It is a story that is slow to develop but it is also one that you need to pay attention to because of the lack of action in it.  I really liked all the subplots in it from the body snatchers trying to locate Natasha’s father to Bostock and Lilt moving behind the scenes playing security guards while not preparing bodies and then to be the ones to call the Dalek Supreme Daleks to capture Davros.   Some of the newer fans might think Revelation of the Daleks moves to slow and they are right it doesn’t move at the pace we have now become accustomed too but that is the charm of science fiction sometimes you have to pay attention and follow a story before the results of the buildup happen.  Revelation of the Daleks is a story that withstands the test of time and is one of the best Colin Baker Doctor Who stories.
Grade A