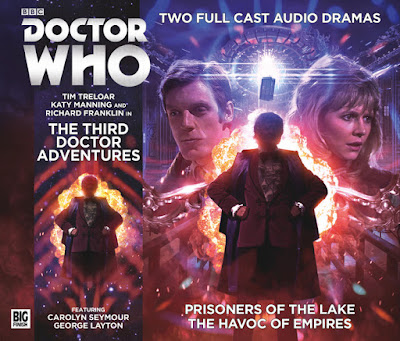 The first Third Doctor box set is out and this time they have recast the Third Doctor with Tim Treloar.  Ok it is just the voice but it should be interesting how it is done.  If it is like the First Doctor box set that came out a few months ago it should be pretty good.  You can order this release from the Big Finish website.
http://www.bigfinish.com/releases/v/the-third-doctor-adventures-volume-01-1158

Captain Mike Yates is investigating the disappearance of artefacts from an archaeological site deep below Dunstanton Lake. It’s hardly a job for UNIT. But when the team discover a mysterious ancient structure buried deep underwater, all that changes.

When chief archaeologist Freda Mattingly ventures inside, she soon realises that her skills do not begin to equip her to deal with what she finds. As an ancient menace begins to stir the Doctor, Jo Grant and Mike Yates must dive down to the lake bed and discover the secrets hidden there. Secrets that could mean the end of all life on Earth…

The Doctor and Jo take Mike Yates on his first trip in the TARDIS, but instead of the historical cricket match they were aiming for they end up on a futuristic space station in the middle of a diplomatic crisis that might escalate into galactic war.

The alien leader of the Chalnoth Hegemony is marrying the human Director of the Teklarn Incorporation, but there are forces that will stop at nothing to disrupt the ceremony. The Doctor is accused of murder while explosions occur across the station, and only Jo Grant, pretending to be a security consultant, can save the day.

But then, there’s the Eels to consider…