Doctor Who - Resurrection of the Daleks Review 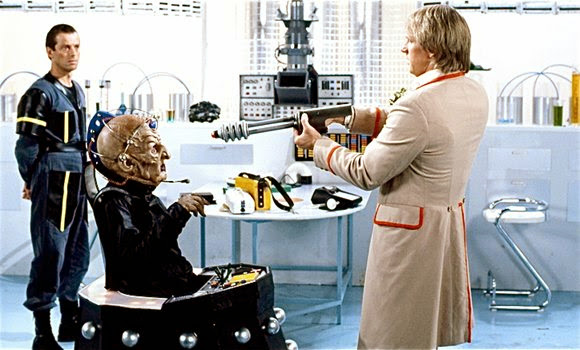 Doctor Who:
Resurrection of the Daleks
By Eric Saward

“I'll say one thing for you, Davros. Your conversation is totally predictable. You're like a deranged child, all this talk of killing, revenge and destruction.”

The TARDIS is stuck in a time corridor which they discover leads to 1984 London near the docks.  In one of the warehouses is one end of the time corridor as they begin their investigation they run into Stein who is trying to escape the forces that control the time corridor.  In the warehouse the stumble upon the army that was dispatched there due to something that looks like a bomb.   While looking around the time corridor is activated and a Dalek appears.

While on the other side of the time corridor a Dalek ship is attacking a prison space station.  They are after a particular prisoner and they are hopeful he can find a cure for the Movellan virus that attacks the Dalek tissue inside the Dalek casing.  Davros is soon freed and he is out for revenge against the Daleks and especially The Doctor who he learns is on the other side of the time corridor.  Davros is determined that nothing will stop him this time and he will go to no lengths to achieve his revenge. 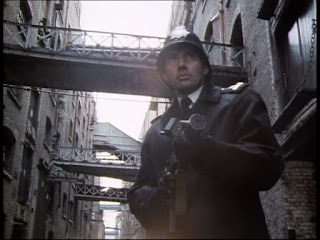 Resurrection of the Daleks is the last story to feature Janet Fielding as Tegan.  She leaves at the end of this story in what appears to be something of a sudden decision.  Mainly she is sick of seeing good people getting killed.  This is something of a departure from many companions leaving as they usually find a cause to help on a planet or fall in love but not often does a companion leave because it isn’t fun anymore.  She has a good reason also as practically everyone but Lytton and his minions and The Doctor, Turlough and Tegan die in this story.   So you couldn’t blame her at all even though she might have changed her mind as she did run back too late to see The Doctor leave. 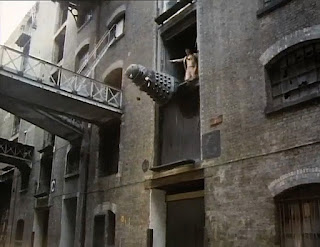 Resurrection of the Daleks is one of the more violent Doctor Who stories ever.  In fact as I said above everyone dies in this story and it starts off with the Daleks prisoners trying to escape and getting shot down in the street by Lytton and his men. Even the innocent bystander gets killed.  Even the guy using his metal detector while Tegan is trying to escape gets killed.  It was a tough day to be at the river near that warehouse.   But there was a lot of death and violence in this story really wasn’t the norm.  Yes people have died on Doctor Who before but this time it just seemed that the body count was really high.

I really liked this story even though the story didn’t make sense in a few parts.  They went to the space station prison to free Davros to save him but hope that The Doctor shows up so they can make a duplicate of him so they can assassinate the High Council of the Time Lords.   This part of the story does not make much sense.  It’s as if this was added on later.  It would have been better if they just tried to get The Doctor’s memories about Daleks defeats with that machine instead of the High Council part. 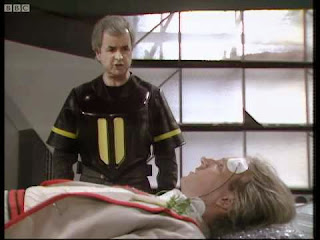 I also liked how the Daleks had to find their creator again and this time they had to use human mercenaries.  It really shows how vulnerable they have gotten over the years and what has happened to them during the war with the Movellans.  They never would have considered using humans unless they were Robomen.  I guess they decided that the Ogrons were not cutting it and decided to use humans.  Problem is Lytton is playing his cards close to his chest and even the Daleks do not trust him.  Lytton was an interesting character and we would see him again in Attack of the Cybermen but how fearless do you have to be to work with the Daleks.  In a way he is a bit like them as he did not have a problem killing one of his men as he made his escape. 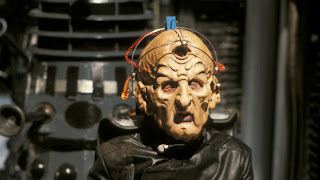 Terry Molloy makes his first of three appearances as Davros.  I really liked his portrayal of Davros and it is the best one along with David Wisher in Genesis.  He just has that way of sounding threatening and then calm that just makes Davros seem so evil.  He plays a great Davros and it is too bad that he is not playing Davros in the new series. Terry Molloy just has that Davros scream talking down pat that is second to none and he will always be Davros no matter who else plays him from now one.  Julian Bleach is good but not Terry Molloy good. 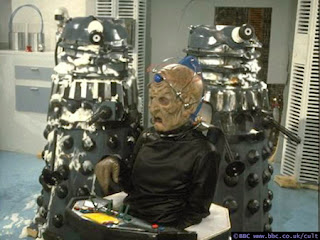 Resurrection of the Daleks is a favorite of mine and I might be biased a bit because Peter Davison is my favorite Doctor and this story takes place in his era.  Yeah the story is almost a rehash of Destiny of the Daleks with the Daleks looking for Davros yet again but this time we see Davros turning against the Daleks which we’ll see more of in the next Dalek story Revelation of the Daleks.  It is also very entertaining as we see the Doctor go a little bit dark as he proclaims he is going to kill Davros.  The Fifth Doctor would never go through with it but this is the second time a Doctor tried to kill Davros as the Fourth Doctor tried in Destiny of the Daleks.  Overall I enjoyed Resurrection of the Daleks despite its faults and I’m always entertained whenever I watch it.
Grade B +