Doctor Who - Destiny of the Daleks Review 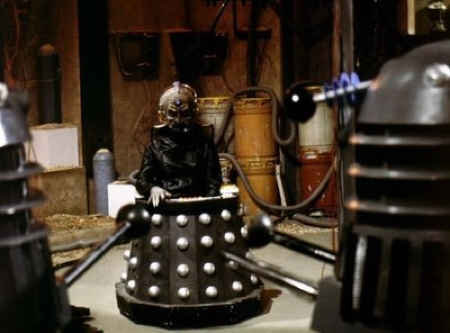 Romana gets back and finds The Doctor gone and goes looking for him when she falls down a shaft. She is quickly frightened as the tremors start up again and this time the Daleks burst through the wall and quickly capture her and put her in a slave detail removing rocks.  The Doctor asks the Movellians why they are on Skaro and they say they are here to fight the Daleks and stop them from getting to their creator.  The Doctor soon realizes that Davros is still alive and that is bad news for everyone in the universe if he is reunited with The Daleks. 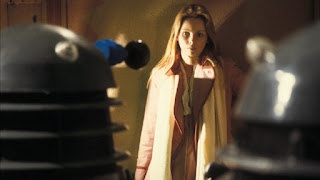 This is the last Doctor Who story that Terry Nation would write for Doctor Who and his creation the Daleks.   Once again he has a story that centers around Davros played this time by David Gooderson and I’ll say he is an adequate replacement for Michael Wisher but not as good as him or Terry Molloy..  Terry Nation has the Daleks at war with another computer race the Movellans and the Daleks need their creator to help and defeat them.  It is a pretty good idea and a good way to bring Davros back from the dead as we all thought he bought the farm at the end of Genesis of the Daleks. 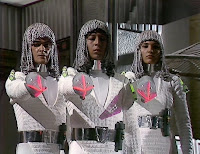 Destiny did have some good points to it.  You see the Daleks being desperate and need their creator after years of getting along without them.  Once the most powerful race they are at a standstill with an enemy that thinks just like them. Even though the Daleks are not robots both races use the same logic in the way the go about this war causing a stalemate.  I just don’t find it plausible for the Daleks to be defeated by the Movellans and find this a fault by Terry Nation.  After all we have seen this war with the Movellans should have been finished by lunch time.  Also I liked the interaction between The Doctor and Davros.  They always have great banter between them and just like in Genesis of the Daleks this is the strongest part of the story. 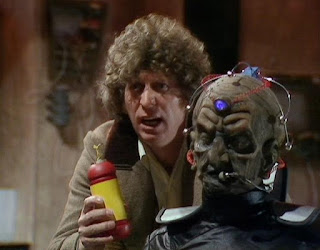 Destiny of the Daleks ends with Davros being frozen for transport to a prison.  This plot point would come back in five years’ time when the Daleks return for their creator again in the Fifth Doctor story Resurrection of the Daleks.   Destiny of the Daleks also starts of season 17 which is one of two seasons’ that wasn’t all that good during the Tom Baker era.  While Destiney has the bad luck of following Genesis of the Daleks it did have the Daleks take center stage in while they search for Davros.    Destiney of the Daleks is also the first appearance of Lalla Ward as the Second Romana.  Yes she was in the Armageddon Factor as Princess Astra but the appearance of Astra is the look Romana picks and for two season’s we get the good performance of Lalla Ward as Romana. 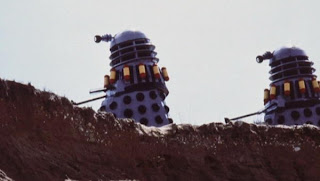 Destiny of the Daleks isn’t the best of Dalek stories but it is one that is fun to watch in a guilty pleasure kind of way.  Even if it is to laugh at Davros mask as it is stretched out and taped and pasted together especially near the mouth.  It is also pretty funny the way the Movellans fall down when you take their power packs off their belts.  I like it because of the Daleks and during the time I was exposed to Doctor Who I had just seen Genesis and they weren’t in it that much so Destiny gave us a lot more Dalek action.
Grade C +