Doctor Who 50th Anniversary: The Era of Monsters Part 2 By @Paul_Bowler 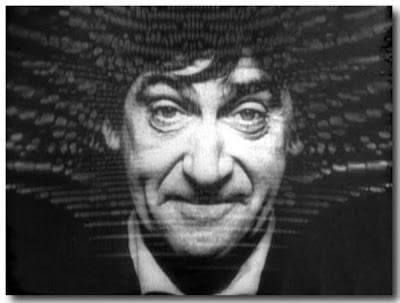 Doctor Who:
The Era of Monsters
Part 2


Season Fives penultimate story is Fury from the Deep (1968) by Victor Pemberton. Based on the writers own BBC radio serial The Slide, and places the Doctor and his companions in mortal danger from a parasitic seaweed that is threatening to overrun a gas refinery and its offshore drilling rigs. The man in charge of the operation, Robson (Victor Maddern), is struggling to contain the situation as the seaweed and poisonous foam begins to affect his staff, possessing their minds, until he himself becomes a vessel for the weed creature dwelling within the pipeline. 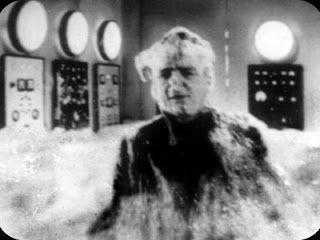 Fury from the Deep is one of the most terrifying adventures of Season Five. Director Hugh David wrings every ounce of psychological tension from Pemberton’s fantastic story, preying on deep seated fears as this isolated community comes under attack. There are scenes of pure horror throughout: the pulsating heart beat of the weed creature in the pipe line is deeply unnerving, bubbling foam boils and writhes from the darkness to consume anyone in its path, and perhaps most horrific of all is when Maggie Harris (June Murphy) is attacked by the grotesque Oak and Quill who subdue her by spewing noxious fumes from their rasping black mouths. Later she appears to commit suicide as she walks into the sea, vanishing beneath the waves in what must surly be one of Doctor Who’s most chilling cliff-hangers. When Robson becomes possessed by the weed creature he captures Victoria and takes her to the control rig, the source of the seething infestation. The Doctor and Jamie manage to rescue her and escape to the refinery, but having fully established itself the weed begins to advance through the pipeline, and its only Victoria’s high pitched screams - amplified by a device the Doctor builds - that ultimately destroys it and frees everyone from its control. Sadly this is Deborah Watling’s final story, meaning that Fury from the Deep is also tinged with a hint of sadness as this popular TARDIS crew say their goodbyes. Victoria decides to stay behind and live with Harris (Roy Spencer) and his wife Maggie at the end of the story, having grown tired of her adventures in time and space. So with a heavy heart the Doctor and Jamie bid her farewell in a poignant final scene, one that ends with them watching Victoria slowly fading from the scanner screen as the TARDIS continues on its way.

After leaving Victoria on Earth the TARDIS develops a fault with the fluid link as it arrives on a spaceship called the Silver Carrier. As they set out to find some more mercury for the fluid link the Doctor and Jamie are attacked by a Servo Robot, Jamie manages to radio a nearby space station called the Wheel and they are soon rescued, but the Cybermats hidden on the Silver Wheel have also made their way over to the space station. The Doctor and Jamie team up with a young woman called Zoe Heriot, and together they discover the Cybermen want to use the Wheel as a beacon for their Cyber-Fleet to lock onto before they can invade Earth. The Doctor manages to break the Cybermen’s hypnotic control over the space stations crew, before connecting the TARDIS vector generator rod to the stations X-Ray laser so he can use it to destroy the Cyber-Fleet. 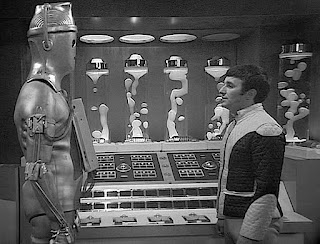 The Wheel in Space (1968) features the return of the Cybermen and the Cybermats, but David Whitaker’s story (based on an idea by Kit Pedler) doesn’t quite mange to live up to the promise of its early episodes, and as such ends up being an extremely routine invasion story. With its claustrophobic setting in deep space, director Tristan de Vere Cole successfully builds up the tension, and you never know when a Cyberman will suddenly appear from the shadows. Overall the Wheel in Space makes a good introduction story for Zoe, and Wendy Padbury is brilliant as the super genius. The Cybermen also get a makeover for this story, there are some chilling scenes when they begin attacking the crew of the Wheel, and the Cybermats are also as deadly as ever. 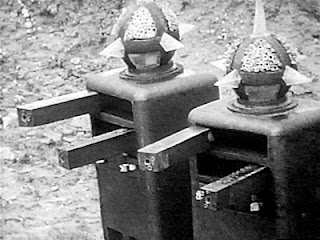 As season five draws to a close Zoe joins the Doctor and Jamie on their adventures in time and space. The dynamic between this TARDIS crew does seem to shift somewhat as the series moves into its sixth season, with Zoe’s keen intellect proving to be almost a match for the Doctor’s, while Jamie is often left a bit bemused and bewildered by how strong and independent she is. With Peter Bryant and Derrick Sherwin becoming involved in other projects, the production of Season Six was beset with difficulties: The Dominators and The Mind Robber were both subjected to rewrites, and The Krotons, The Space Pirates, and The War Games were all hastily commissioned after a successive number of stories had to be abandoned.

The sixth season of Doctor Who was the last to be entirely filmed in monochrome, and would also feature the departure of Patrick Troughton, along with Frazer Hines and Wendy Padbury who had also decided to move on. In many ways Season Six is the end of an era, and although The Dominators (1968) and their deadly Quarks proved to be something of an understated start to the season, things rapidly improved when the TARDIS was apparently destroyed in the white void of The Mind Robber (1968) - transporting the Doctor and his companions into a land of fiction. The Cybermen would make another attempt to invade the Earth, this time with the help of entrepreneur Tobias Vaughan (Kevin Stoney). The Invasion (1968) would see the Cybermen emerging en mass from the sewers of London, a scene that would go on to become one of Doctor Who’s most iconic moments. 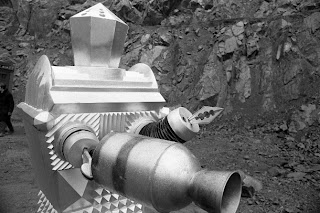 Robert Holmes first story, The Krotons (1968/69) is a far from auspicious start for the writer who would go on to write a plethora of classic Doctor Who episodes in the years to come, while The Seeds of Death (1969) would see Brian Hayles script the Ice Warriors return, before The Space Pirates (1969) also proved to be something mixed offering from Robert Holmes. The ten part epic, The War Games (1969), saw the Doctor and his friends racing across a number of different time zones in their bid to stop The War Chief from taking people from various conflicts throughout Earth’s past and making them fight for the amusement of his alien masters. At the end of the story the Doctor is forced to call on his own people, The Time Lords, for help. The Time Lords intervene, using their immense powers to return the combatants to their own time zones, but the price is high for the Doctor. He is captured and placed on trail by his own people, charged with breaking the Time Lords code of non interference with the affairs of other worlds, and ultimately sentenced to exile on Earth. Allowed only to say goodbye to Jamie and Zoe before they are sent back to their own times, every memory of their adventures with the Doctor wiped from their minds, before he must then endure the ignominy of having his appearance is forcibly changed by the Time Lords as he begins his sentence on Earth. 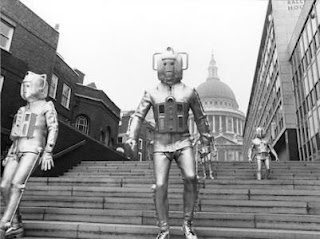 With so many of these fantastic episodes junked by the BBC much of Patrick Trougnton’s era sadly no longer exists. There is always hope that some of these episodes might turn up one day, having been sold overseas, it is entirely possible that the miraculous moment when Tomb of the Cybermen was found in Hong Kong back in 1991, and quickly released on video in 1992, might happen again one day. Indeed, only last year two more classic episodes turned up: Episode 3 of the William Hartnell story Galaxy 4, and Episode 2 of The Underwater Menace from Patrick Troughton’s first season. The Invasion was released on DVD in 2006 with its missing episodes recreated by animation, the results proved highly popular with fans, and could well pave the way for more of Troughton’s incomplete stories to be released in this way. Although at the moment I could only really see The Moonbase, The Ice Warriors, and The Underwater Menace feasibly benefiting from similar techniques to make them available on DVD. They may be missing from the BBC’s archives, but all the soundtracks of the 2nd Doctor’s missing adventures are now available on Audio Go, with superb linking narration, and are a still a perfect way to enjoy Doctor Who’s lost episodes. It is a credit to Troughton’s immense talent that these stories work so well on audio, they are as spellbinding now as they ever were, and effortlessly captivate our imagination of a classic era of Doctor Who that is now sadly consigned to history. 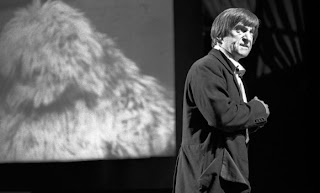 Patrick Troughton’s three years as the Doctor were some of the finest from the programmes monochrome era. Troughton’s performance is simply superb in every way, proving beyond a shadow of a doubt that the programme could survive the change of its lead actor. Anneke Wills and Michael Craze were instrumental in bridging these two eras of the show, while Troughton’s comic timing with Frazer Hines is a joy to behold, and together with Deborah Watling, then later Wendy Padbury, the Second Doctor’s companions would become an endearing part of this halcyon age of Doctor Who.

Season Five is certainly a contender for one of the best, if not finest, seasons of Doctor Who ever made. As Doctor Who begins to celebrate its 50th anniversary, the programmes past is likely to come under even greater scrutiny than ever before. Season Five was ahead of its time. It takes the simple base under siege format and turns it into something uniquely special. Blessed with impeccable design and production values, Season Five introduced a wealth of classic monsters, paved the way for UNIT to be phased into the Doctor’s life, and together with a fantastic regular cast, The Era of Monsters remains a timeless gem that will endure forever.