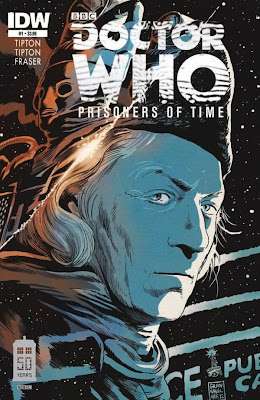 Doctor Who:
Prisoners of Time

Words by
Scott and Dave Tipton
Art by
Simon Fraser

To celebrate the 50th Anniversary of Doctor Who IDW has a released a story that will span the entire year and feature all eleven Doctor’s.  The first issue as you would guess is a First Doctor story.  Joining the Doctor is Vickie, Ian and Barbara and probably takes place closer to the end of Ian and Barbara’s time in the TARDIS.  The story takes place in London in the year 1868 and The Doctor is taking the two school teachers to the Royal College of Surgery to meet his friend Thomas Huxely the famous biologist.  Soon the travelers find themselves helping Thomas Huxely and the other professors in finding some missing students and proceed to head for the tunnels of Londons Underground railway.  Soon there The Doctor and his companions notice something familiar.  Vicki soon hears a noise that once bothered her on Vortis.  The Doctor soon realizes that the Animus has returned and has brought The Zarbi with him.  But even worse is how it ended up on Earth.

This first story was pretty good in setting up the story.  We were introduced to the mysterious villain at the beginning and get a little bit of knowledge of what his plan is.  Then you get a story that is quite simple in itself.  Nothing too complicated just The Doctor outwitting a few Zarbi and saving the day.  Then you get the cliffhanger and then you get the gravity of what the plan is.  Pretty clever and has me wondering how this will tie in with the other Doctors.  The writers did a good job of capturing the era of the First Doctor.  This story had the feel of a William Hartnell story and the characterization of the Doctor was spot on.  Can’t wait to see how they capture the other Doctors.

What I did have a problem with is that I did not like the art. At times it seemed like the characters faces were unrecognizable and well featureless. What I mean is that the companions had Charlie Brown faces.  The Doctor was fine and fully detailed all the time but the companions were not.  This bothered me mainly at the beginning of Prisoners of Time when the main bad of the story was looking at all the companions and I could not recognize at least one of them.  Needless to say art like that really bothers me and does detract from the enjoyment of the story.   But needless to say I did enjoy this story even with my problems with the art.  Prisoners of Time is out now and should be hunted down and bought by all Doctor Who fans.