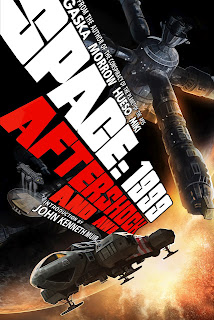 On September 13, 1999 an accident caused an explosion which knocked the moon out of the Earth's orbit. The people on Moonbase Alpha survived and went on to have many harrowing adventures in deep space. What of Earth? Was it devastated beyond all repair? Did anyone survive? Now in this comic book continuation of the original Space: 1999 TV series we have our answers. 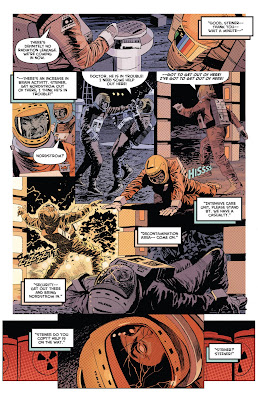 Archaia Entertainment has released a hardcover copy compiling together their new Space: 1999 comic collection. Space: 1999 “Aftershock and Awe” tells two different tales about the eventful September 13, 1999 when the moon was blasted out of Earth's orbit. Told from the perspective of the men and women of Moonbase Alpha, “Awe” is a retelling of the first episode of Space: 1999, “Breakaway.” Reprinting the original Charlton comic but fleshing out the story with brand new material, “Awe” really does a great job in capturing this first tale. Added are segments that didn't make it into the final print of “Breakaway” including more with outgoing Commander Gorski as well as some additional connections with season 2 of Space: 1999 including small parts for Tony Veredeschi and Shermeen Williams.

Space: 1999 was a very visual series and the artwork in this book superbly copy the series. With illustrators such as Gray Morrow, David Hueso and Miki, the book really captures the excitement of the TV series. The story is told fairly closely to the original but adds quite a bit of additional tidbits to not only help link up some continuity for the series but also some characterizations. It also sets up a new set of characters that were left behind on Earth.

“Aftershock” follows several characters on Earth. Each of them has some sort of connection with Moonbase Alpha. One has a father on the base, another, a daughter. Others were involved in a covert operation surrounding the moon's resources for military purposes. When the moon was blown out of Earth's orbit, destruction in the form of earthquakes, tidal waves and debris killed thousands and we see this destruction first hand from the point of views of these characters.

I liked this book an awful lot. I have been critical of some of the things that Powys Media has done with their continuation but for some reason Archaia has done a better job with it. Both publishers have felt the need to clean up the continuity of the series by explaining things. The original series did not have a lot of continuity especially between the two seasons where sweeping changes (including characters gone missing without explanation) were made. For example, in “Awe” we are introduced to Shermeen Williams. Shermeen first appeared in the show during its second season. She was introduced as a character of 16 years old and yet the amount of time the Moon had been traveling in space had been close to 6 years and so that would make her 10 at the time of “Breakaway”. The “Awe” story has an explanation of her being on the base and what happens to her parents.

We also learn of other connections including one Moonbase Alphan who has a 16 year old daughter but doesn't know it. This daughter will no doubt become an important character in future stories. We also have some political intrigue with a secret cover-up surrounding a military plan that apparently is destroyed with the accident on the moon. Interestingly this covert group still has at least one agent on the moon when it went out of orbit. 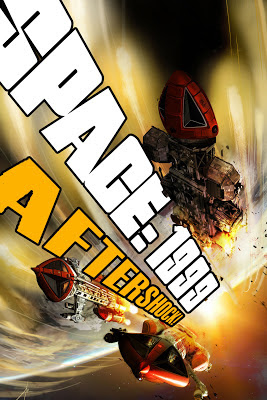 One of my criticisms of the Powys Media books was taking characters that we all love and making decisions with them that alter their characters too much. I felt both Maya and Paul Morrow were among these changed characters in those novels. The Archaia stories have yet to stray that far away from the series to encounter these problems but we do see some minor changes like Commander Koenig was recently engaged to be married right before the moon leaves orbit and the previous mentioned character that is an agent of the military plot.

The set up that these stories has created is a planned series of stories that will continue to follow the people of Earth who launch a rescue mission into outer space in hopes of finding the moon. The idea states that this mission could encounter planets and aliens that Alpha had encountered years earlier. One suspects that we would learn more about the military plot and other subplots introduced in this first couple of stories.

The comic series is available online and in comic format but was recently released in a hardcover format that is beautiful. The book is thick with lots of pages and for $17.00 is definitely worth it.  I am eagerly awaiting for this series to continue!!

Soon there will be a paperback compilation reprinting the original comics from Charlton, Look-In and the Annuals.