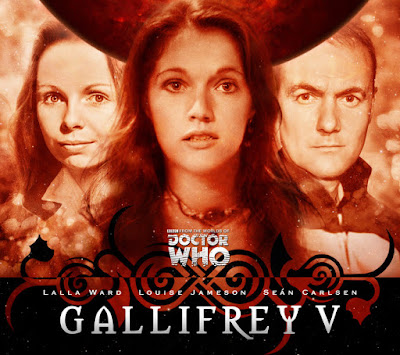 Another month another batch of Doctor Who releases from Big Finish. This time we get a box set for the Gallifrey series.  The Series 5 box set stars Louise Jameson as Leela and Lalla Ward as Romana. You can order it from the Big Finish website at the link below.
http://www.bigfinish.com/releases/v/gallifrey-series-5-box-set-784

With Romana and Narvin ruling New Gallifrey from the heart of the capitol, their former friend Leela now lives as an Outsider, existing in the wastelands of Gallifrey with the former slaves she fought hard to free. With no hope of returning home, to their one true Gallifrey, these three exiles try to find a way to survive and build a better Gallifrey than the barbaric, lawless one they have found themselves in.

However, politicians, scientists and industrialists alike enjoyed luxury, power and wealth before Romana and Narvin came along and they will take any action they deem necessary to regain what they have lost. And if Leela’s Outsiders are swept away as a consequence, so much the better.

And in the shadows, watching and waiting, is an ancient evil that no one can stop...

Supreme Leader of Gallifrey - the Lady President Romana - is making a series of decisions that are costing her allegiances within the Inner Council.

Lord High Chancellor Narvin is trying to protect the truth behind their presence there.

Emissary Leela is trying to secure basic rights for her allies, the Outsiders, now freed from generations of bondage to their masters, the Regenerators of Gallifrey.

But their enemies plan to expose the truth and let society rise or fall by the consequences of their political ambitions...

Before the fall of Project: Rassilon, the Regenerators of Gallifrey committed atrocities upon their slaves in the name of science. As Leela discovers the results of one such crucible, Romana and Narvin are pushing forward ways to discover the secrets of time travel, and jump-start their new Gallifrey’s evolution.

However, science isn’t always the way forward, and in a society built upon the foundations of amorality and fear, a backward step may be the only solution…

Romana’s secret is in danger of being exposed by those she trusts, and the only hope of escape is through the Axis. But will Leela’s forthright determination to see justice done, whatever the costs, mean their chance to get home will be lost forever…?

And if they are able to regain access the Axis, is the world they left behind any better than the society they have built here?