SFX Confirms Ice Warriors Return In Doctor Who Series 7B 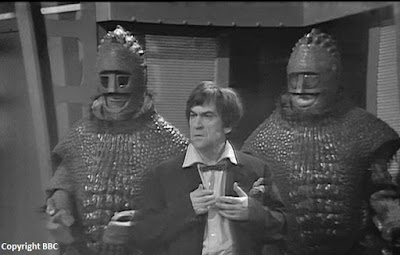 SFX has announced today that the Ice Warriors will be back in the second half of Series 7 of Doctor Who. Carol Skinner has made the announcement to SFX in an interview that they will be back in the story penned by Mark Gatiss and will be the 3rd episode shown. Here is her quote.

“We’ve got the most fantastic episode by Mark Gatiss,” executive producer Caro Skinner tells SFX, “where we are bringing back the Ice Warrior… on a submarine! It’s a really wonderful kind of ‘bunker’ episode, and a classic monster which Mark has brought his own inimitable twist to.”


This is awesome news for fans of the classic series as the Ice Warriors were last seen in Jon Pertwee's last season The Monster of Peladon back in 1974.  Well this is really starting to be an exciting second part of Series 7 with Cybermen and the return of the Ice Warriors.

You can read the full article here from SFX

Email ThisBlogThis!Share to TwitterShare to FacebookShare to Pinterest
Labels: doctor who, Doctor Who Series 7, Ice Warriors