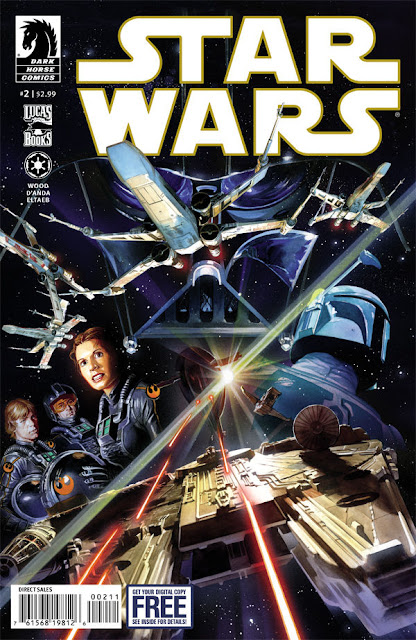 Continuing on from issue one Princess Leia is putting together her team to look for a planet that would be suitable for a rebel base.  This time under orders from Mom Mothma she is doing it in secret and hand picking her team to avoid the mole that embedded in the rebel fleet.  They have also been issued ne X – Wing fighter to help in the search.  Meanwhile Han Solo and Chewie are heading for a rendezvous with one of Mom Mothma’s contacts.  This takes them to Corsucant deep in the Empire.  They had to take the long way as a familiar bounty hunter has caught their trail and are trying to cash in on Jabba the Huts bounty on Han’s head.  Plus the new commander who is taking command of Darth Vaders Imperial Star Destroy takes command and promises to outdo the Jedi.

What can I say?  Two issues in and I’m so hooked on this new Star Wars comic book by the good folks at Dark Horse Comics.   Brian Wood has so far written a pretty good story that has a really good mystery behind it.   Like with issue one issue two has that good feel to it that harkens me back to my childhood when I was reading the Start Wars comic books from the 80’s.  So far so good as this story has gotten its grips in me and is very entertaining and intelligent.  What most fans should expect from a comic book that is from the Star Wars Universe.  Looking forward to seeing what happens next and what other surprises Brian Wood has in store for us.

Yet again Carlos D’Anda art was magnificent.  For a comic book the art is very important to the story. If the art isn’t up to snuff or not to my liking then the story will suffer or I might not like the story as much.  But not the case here as the art like in issue one was magnificent.  Very well done and it looks awesome especially the space scenes.  So Star Wars issue two by Dark Horse is another fine example of a good read and you must head out and buy this book as it is so far a really good start for Star Wars Adventures between New Hope and Empire Strikes Back.