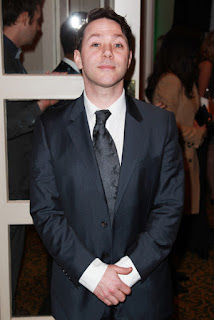 I found this over at Kasterborous and it appears that "An Adventure in Time and Space" will be going as far the turn over from William Hartnell to Patrick Troughton.  As news has come out today that former League of Gentlemen star Reece Shearsmith has been cast as Patrick Troughton.  Mark Gatiss had this to say about it.

I first asked Reece about 12 years ago when I started thinking about this project. We were in the midst of League of Gentlemen and I just remember thinking, if anyone plays Patrick Troughton, it should be Reece. Like the second Doctor, he’s small, saturnine and a comic genius. The complete package. He thought it was a fantastic idea and I’ve kind of nurtured it all this time. “Reece has a funny relationship with Doctor Who – mostly to do with impressions of the Borad from Timelash! He and a friend were obsessed with season 22 [Colin Baker’s Doctor, 1985]. One of my earliest memories of Reece is him going, ‘I am the Borad!’ He’ll do the whole of Timelash at the drop of a hat. Which is a strange qualification.

Sounds like "An Adventure in Time and Space" is going to be a pretty interesting special when it come out later this year.

Email ThisBlogThis!Share to TwitterShare to FacebookShare to Pinterest
Labels: An Adventure In Time and Space, doctor who, Doctor Who 50th Anniversary, Reece Shearsmith