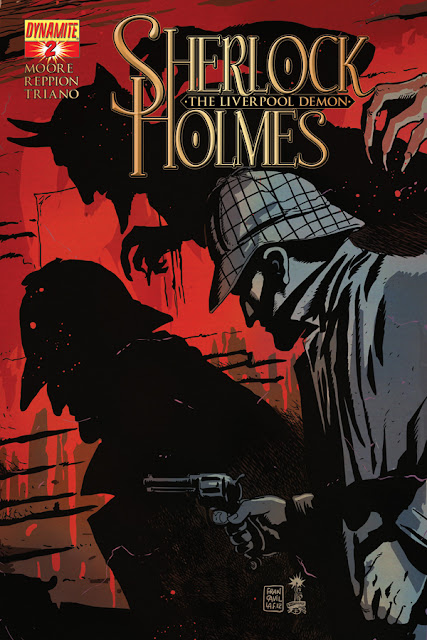 Holmes is now curious about the Demon that seems to be terrorizing Liverpool and decides to postpone going back home to London to see if he can figure out what is actually doing the terrorizing.  Holmes goes to the coroner and looks at the body to see if he can find anything out of the ordinary. Satisfied with that he heads to St. Mary’s Church the scene of the crime and does a look around where things appear pretty strange.  Holmes is pretty satisfied with what he saw in the church and seems to have come up with a couple of ideas.  Then there is the thing with the strange man called Drummond who spends his time with the dog fights and seems to have a peculiarly looking dog with big claws.

The second part of The Liverpool Demon takes delves deeper into the mystery that was started with the 1st issue.  I really enjoyed the Holmes and Watson part of the issue as I felt that was the strongest part of the story.  The part with Drummond was well kind of strange and the whole dog fight scenes seemed to be excessively gory but I’m sure as the story unfolds in the next issues it will make more sense.

I had a problem with the art with this issue. It seemed to be pretty sloppy in parts mainly with the part that involved Drummond.  Plus with the scenes in a dark area it made it look a bit worse than it should have.  Put the art on the book besides those scenes are pretty good.  Overall I have been enjoying the story so far and hope the rest of the mini-series turns out to be pretty good but so far so good for Sherlock Holmes: The Liverpool Demon.
Posted by DR5WHO at 4:50 PM