Doctor Who DVD Releases Announced. Kind Of Disappointed With One 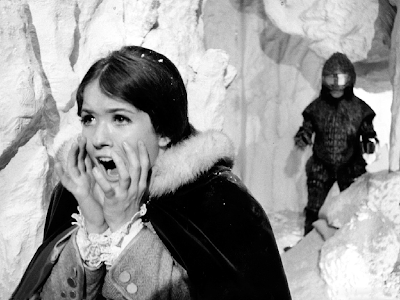 The Doctor Who website has announced a list of upcoming DVD releases.  While some good news I was greatly disappointed with one and surprised by another.  We finally have confirmation for the last two complete Doctor Who stories Tom Bakers "Terror of the Zygons" and the colorized Jon Pertwee story "The Mind of Evil" which also has a great performance by Roger Delgado as The Master.

In what was a surprise they are releasing the web story "The Scream of the Shalka' which stars Richard E. Grant as The Doctor and quite before Utopia  Derek Jacobi as The Master.  This was an animated web episode that aired on the Doctor Who website back in 2003.

What I find to be greatly disappointing is the release of "The Ice Warriors".  Apparently they will not be animating the missing episodes 2 and 3 like they have before with "The Invasion" and this months release of "The Reign of Terror" but instead are reconstructing them with telesnaps and audio.  This is BS and inexcusable.  Why bother releasing it at all.  You take the time to animate the other two releases but go half ass with The Ice Warriors. Shame on you Doctor Who Restoration Team and BBC DVD.  That is just poor judgement on your part and I'm sure I'm not the only one who is pissed and disappointed with this news.

Plus of course we have the typical special editions along with the "Spearhead from Space" Blu Ray which will be the only classic blu ray release.  Here is the full list of releases and UK dates.

Email ThisBlogThis!Share to TwitterShare to FacebookShare to Pinterest
Labels: doctor who, Doctor Who DVD, Ice Warriors, Terror of the Zygons, The Mind of Evil