Doctor Who 50th Anniversary: The Krotons by @Paul_Bowler 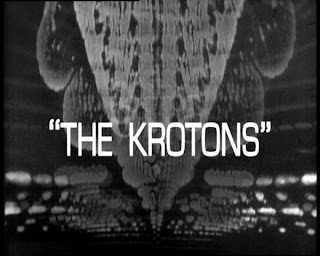 The Krotons
By Robert Holmes
Reviewed by Paul Bowler

"Of course he can. The Doctor's almost as clever as I am."

When the TARDIS brings the Doctor, Jamie, and Zoe to a strange unnamed planet they encounter the Gonds, a race of subservient humanoids who are controlled by ruthless crystalline aliens called the Krotons. The Doctor leans how the Krotons spaceship, the Dinatrope, crash landed after sustaining damage in a conflict in deep space. The Krotons remained in suspended animation, while their machinery searches for the mental energy they need to absorb to restore themselves. Tests are carried out at regular intervals on the population, with the two most intelligent Gonds sent to the Dynatrope to become companions of the Krotons - whey they are secretly drained of their mental energy and killed. When the Doctor and Zoe take the tests their immense intellects are enough to revive the Krotons. The Doctor works with the Gonds to try and find the Krotons weakness, but with the TARDIS under attack and Jamie a prisoner, the race is on to destroy the Krotons and their ship. 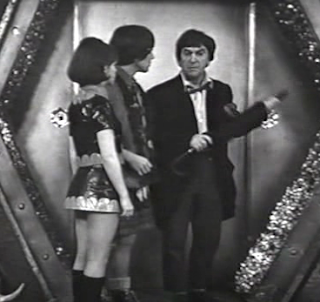 The Krotons (1968/1969) is not the best story from Season Six, falling as it does between The Invasion (1968) and The Seeds of Death (1969), but as Robert Holmes first scripts for Doctor Who the end result is far from satisfactory. Of course Robert Holmes would go on to write some of Doctor Who’s most memorable adventures, sadly the Krotons is not the best example of his work. Indeed, Season Six did have a somewhat troubled production, with a number of stories being hurriedly replaced at the last moment. The Krotons was one of these stories, brought forward to fill a gap when Frazer Hines decided to remain until the end of the season and leave with Patrick Troughton and Wendy Padbury in The War Games (1969).

Fortunately the series regulars are on fine form here, with Patrick Troughton and Wendy Padbury in particular having some of the best scenes. It’s hilarious to see the Doctor and Zoe taking the Krotons tests, Frazer Hines also gets plenty to do when Jamie is trapped by the Krotons, but sadly Holmes scripts fail to give the Gonds and their civilization any real substance to bring it to life. The supporting cast all just seem to be going through the motions, with only the marvellous Philip Madoc as Elek, and Beta (James Cairncross) really making anything of their roles. 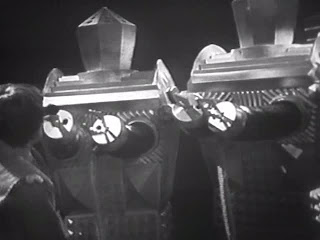 The Krotons themselves are somewhat poorly conceived, their bulky bodies seem to waddle around, their featureless heads convey no menace whatsoever, and their tubular arms which end in strange claw-like hands seem disproportionately mismatched to the rest of their bodies. The Krotons ship is also very crudely designed, the effect is compounded further by some very unconvincing model shots for the Dynatrope, which is probably why director David Maloney kept these shots - and those of the Gonds buildings - on screen for only a few seconds. The only saving grace about the Krotons is the crystalline creatures booming voices, provided by Roy Skelton, which at least manages to give them some presence on screen. 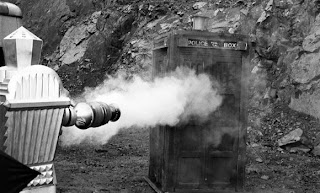 There are a few exterior scenes that stand out, particularly when the Krotons attack the TARDIS and apparently destroy it. Even this dramatic moment is quickly nullified when the TARDIS soon reappears, having used its Hostile Action Displacement System to evade the Krotons firepower. The whole scene is pointless and extremely silly, we know the TARDIS is indestructible, and it has survived far greater punishment than this in the past. It’s almost as if the production team were trying to recreate the cataclysmic break up of the TARDIS in The Mind Robber (1968), but as with most aspects of The Krotons the effect is decidedly second rate.

If you can forgive the below average effects and substandard script, you will find a passable Doctor Who story, but it is hardly a shining example of the Patrick Troughton era of the show. I think the real problem with The Krotons is the portrayal of the Gonds themselves. Robert Holmes would become a master of creating alien species, strange new civilizations, and memorable double acts, but sadly none of this is evident in The Krotons. Meekly enslaved by a force they have never seen, the Gonds are instantly forgettable, their world is never even named, and frankly with such little character development there is little reason to care about what happens to any of them. 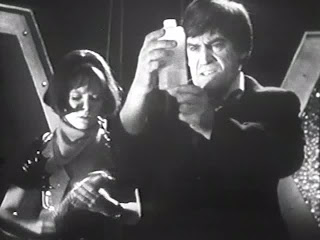 Even the stories conclusion is anticlimactic, with the Doctor and the Gond scientist Beta creating an impure kind of sulphuric acid to destroy the Krotons life support systems. With a little more time and effort perhaps the Krotons could have been a lot better, as it stands, this adventure seems doomed as soon as the Krotons probe emerges from the Dynatrope at the end of Episode One. Needles to say the Krotons doesn’t have a lot to recommend it. It’s worth a look, but in a season featuring Ice Warriors and Cybermen, the Krotons fails to stand out from the crowd.