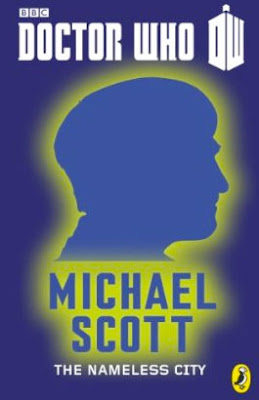 Doctor Who:
The Nameless City
By Michael Scott

The TARDIS is broken and The Doctor has sent Jamie out to get some material to help with repairs.  While out he comes upon a stranger who is being robbed in an alley and promptly goes to his aid and fends off the mugger.   In gratitude the stranger gives Jamie a book as a reward.  Jamie returns to the TARDIS and gives the book to The Doctor.  The book turns out to be evil and it turns out to be the Necronomicon which is an old book that has power.  Lots of power as it was able to pilot the TARDIS to the edge of universe where the Nameless City resides.  There resides The Archons who is older than time themselves and what they want is the TARDIS so they can take over the universe.

This is the second eBook released to celebrate the 50th Anniversary of Doctor Who.  This time we are treated to a Second Doctor adventure and if I had to guess takes place between Fury From the Deep and The Wheel in Space.  For the most part I enjoyed the story even though it didn’t feel like a Second Doctor story.   For the most part it felt more like a story for one of the later Doctors as it just didn’t have the feel.  Sure the author used his catch phrases and had Jamie as a companion but it just didn’t grab that era.   It felt like it could have been better if it was for another Doctor.

With that said I do have a pretty big problem with it.  For one the messing with the origins of the TARDIS and the Time Lords just did not set well with me.  In the first book we had the Doctor get a new hand by cloning it and having it surgically put on his arm.  Now in The Nameless City we find out that the Archons actually invented the TARDIS by growing them from seeds and that the Time Lords stole that technology and knowledge from them.  WHAT!!! OK I know they are doing something special by having prominent children’s authors coming on board and writing a short story for Doctor Who to help celebrate the 50th Anniversary but letting them rewrite the mythos of Doctor Who is just wrong.

I know this is just a book and probably not canon but could they at least stay true to the history of the show.  Even if you think it’s a good idea to explore this tthen that fine but doing it in a short story is just wrong as you should be able to explain more than what you can do in a short.  I just didn’t like what they did in this story and felt it should not have been mentioned.  Plus it made the overall story not as enjoyable as it was to that point.  Even with the problems I had with it the story was enjoyable but then that happened and I was so put off.  Hopefully the other stories in the series will try and stay true to Doctor Who and be enjoyable to read.

Email ThisBlogThis!Share to TwitterShare to FacebookShare to Pinterest
Labels: 2nd Doctor, doctor who, Doctor Who The Nameless City By Michael Scott, Michael Scott