Synopsis For BBC 3's New Zombie Drama "In The Flesh"

BBC 3 seems to be capitalizing on the zombie craze that has taken affect on TV and movies and so forth.  So here is the synopsis for their foray into the genre.
Source: BBC Media Center 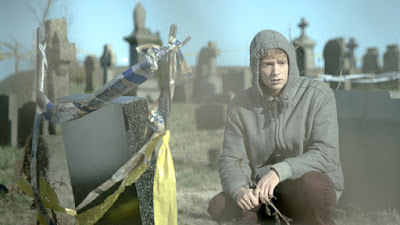 In The Flesh
Date: 15.02.2013Last updated: 15.02.2013 at 13.55
Category: BBC Three; Drama
In The Flesh is an exciting new three-part drama for BBC Three that tells the story of zombie teenager Kieren Walker (Luke Newberry) and his reintegration back into both the local community and the heart of his family.

After his death four years ago, his friends and family thought they’d never see Kieren again. But then, shortly after his funeral, thousands of the dead were re-animated; and now, after months of re-habilitation and medication, the zombies are gradually being returned to their homes.

Now known as PDS sufferers (Partially Deceased Syndrome) - and since the passing of the PDS Protection act - the government have set an agenda of acceptance and tolerance, one that is at odds with the communities abandoned at the time of the rising, and the bloody battle between zombies and humans that ensued.


A cauldron of brutal anti-zombie sentiment and the source of the ‘rotter’ hating Human Volunteer Force (HVF), Kieren returns to his home in the rural village of Roarton. Here he is forced to confront his family, the community that rejected him and the flashbacks that continue to haunt him of what he did in his untreated state.

Kieren’s parents, Steve (Steve Cooper) and Sue (Marie Critchley), are undoubtedly pleased to see him, but his sister, Jem (Harriet Cains), isn't so ready to pick up where they left off.

Meanwhile, the HVF, led by violent Bill Macy (Steve Evets) and backed by local churchman Vicar Oddie (Kenneth Cranham), are ready to take action against any PDS Sufferer reintegrated on their patch.

Made by BBC DRAMA PRODUCTION NORTH

Email ThisBlogThis!Share to TwitterShare to FacebookShare to Pinterest
Labels: BBC3, In The Flesh