Doctor Who - Matt Smith Talks About "The Time of The Doctor" 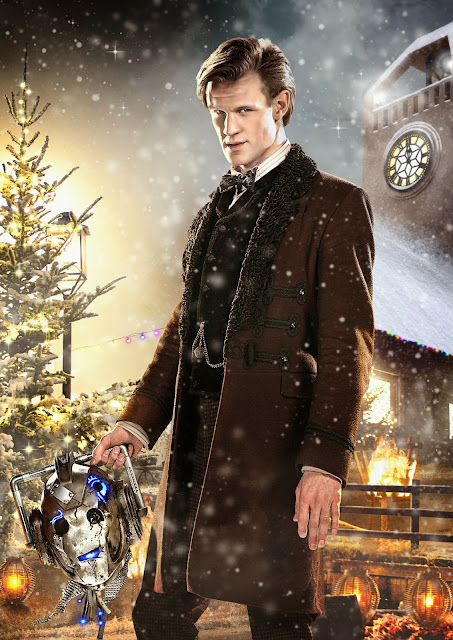 
Can you first tell us a little bit about the Christmas special?

The Christmas special for me is a bitter sweet episode because I’m leaving, but Steven has written a brilliant, adventurous, funny episode and I’m really thrilled with it. It feels wonderfully Christmassy.

What did you want from your last episode?


I think it’s good for the Doctor to go out with a bang, a crash and a wallop. I’m pleased it’s really funny and mad. When I got to the last 20 pages and it was quite a hard read for me, but I hope it’s going to be a belter. We’ve got a great director in Jamie Payne and some really lovely double hand stuff with me and Jenna. Steven’s managed to tie in plot points and narratives that have been threaded through over years and I think that’s ingenious.
Emotionally, how did it feel to be doing your final performance?

It felt very emotional to be doing my final episode. My mother is mortified, honestly she was at the front of the campaign for me to stay and wasn’t happy when I said I was going to leave. But, when you’ve got to go, you’ve got to go. Of course, it’s very sad for me in many ways because everything is the last time. It’s the last read through, the last time I put on the bow tie and the last scene in the TARDIS. But the show is about change and I had lunch with Peter Capaldi shortly after the announcement and I think he’s just going to be incredible. He has the most brilliant ideas. As a fan, I’m genuinely excited to see what he’s going to do because I think he’s going to do something extraordinary.

So you’re still going to be a fan?

Yeah, absolutely, I’ll be a fan. I’m very grateful to Steven Moffat and that whole team up in Wales for the past four years and you know I want the show to go from strength to strength, which it will. It might take me a couple of weeks to get my head around it. I think it was the same for David and I think it was the same for Karen, when she watched Jenna come in. I don’t think it’s easy, but it’s not my show, it’s the fans show, so I’ll be a fan and then it will be my show.
Have you been given anything by the fans as a leaving present?

I was doing a promo shoot for the 50th and these two girls came on set. They had made me this book which must have had 50 or 60 letters in, saying thank you for being Doctor Who. Things like that are amazing. I’ve said it before, the fans of this show are really spectacular and they’ve made this an extraordinary journey for me and I’m very, very grateful. I don’t think there’s another set of fans like it.

Can we expect some nods to past series with this Christmas special? Are we referencing old specials?

With Doctor Who you’re always looking back and forward at the same time, because you tend to be jumping around. I don’t want to give too much away, but obviously when you look at my tenure over the last four years, there are stories and plot points and villains in there that are particular to my Doctor and I think he’s got to face all that.
Posted by DR5WHO at 8:15 AM