Doctor Who - Orla Brady Talks About "The Time of The Doctor" 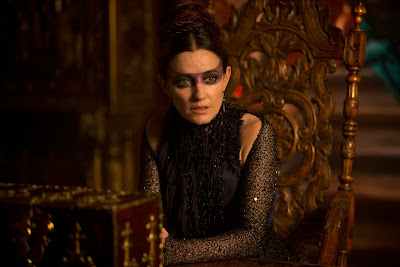 Its that time when interviews are galore for the Doctor Who Christmas Special. The BBC Media Centre has a bunch of interviews and we start it off with guest star Orla Brady who plays Tasha Lem.  The Time of The Doctor airs on Christmas Day.


What drew you to the role of Tasha Lem?
So you're sitting in your dressing room on an ordinary day (well ordinary for an actress) playing a normal person who makes breakfast and loses her purse sometimes. Then along comes a call to play a galactic nun and whizz around the universe with Matt Smith. Now what girl wouldn't be drawn to that?

Can you tell us anything about how we first meet your character?


The Doctor goes to see Tasha as they are old friends. He needs her help and knows he will find it with her. Although she is fearsomely powerful, she is loyal to her friend.

What can you tell us about your costume and make-up? Did you work closely with the costume designer?

The designer Howard Burden knows the Doctor Who world inside-out and had an image of Tasha that I loved from the start, so there was very little need for me to suggest anything. I just climbed into it really. Emma Cowen created a look that was a little spooky, referencing Blade Runner a little. We both wanted her to look as she is described in the writing, imposing, human, but with a touch of alien.

In this special a whole host of the Doctor’s most famous enemies come together, including Cybermen, The Silence, Weeping Angels and Daleks - how did you find filming opposite these monsters? Have you had to do anything similar for previous roles?

Most of my acting life I have played ordinary women so obviously monsters haven't factored much. However I did love getting to face off with one of this lot in The Time of the Doctor.

How did you find working with departing Doctor, Matt Smith?

Joyous. I had heard through friends that he was a nice guy (and he is) but what struck me most is how enthusiastic and engaged he was in his role, in every single scene we played. It so often happens that someone playing a character for years sits back a bit. He didn't. He was as full of energy and inventiveness as someone on their first day and it was truly good to be around.

Did you meet the next Doctor, Peter Capaldi?

Yes. Peter came to set for the first time and it was good to see him again as we had briefly played boyfriend and girlfriend years ago and he was hilarious. He has an air about him that man....can't wait to see what he will do with his Doctor.

How was it filming in Cardiff?

Would it be obvious to say rainy? It was a place I had never been to, I didn't know anyone and was staying in a hotel which can be a bit glum. However the thing I discovered about Cardiff is that it is the friendliest place I have ever been. Ever. The Capital of Friendly. I could live there now I think... but I would buy a new raincoat.

And finally where will you be watching the Christmas special?

My Mum and brothers are insisting on watching it on Christmas Day, but I find it excruciating to watch things I'm in with other people so I will go for a pint with a friend.
Posted by DR5WHO at 12:39 PM

Email ThisBlogThis!Share to TwitterShare to FacebookShare to Pinterest
Labels: 2013 Christmas Special, doctor who, Orla Brady, The Time of The Doctor