The X-Men vs. The Fantastic Four Movie? 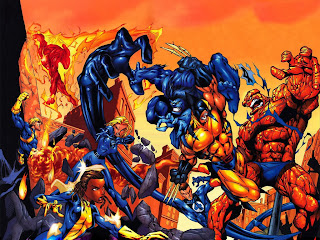 Bleeding Cool reports that Fox is jumping on the superhero overload bandwagon and is planning on bringing two Marvel superhero groups together into one movie franchise.  Currently The Fantastic Four is being developed for a reboot and The X-Men is in the middle of a series of movies including Days of Future Past (May 23, 2014) and Apocalypse (2016).

The report comes from an investors news piece and is not any official announcement so who knows if it is true.
http://www.fool.com/investing/general/2013/12/26/2-companies-other-than-disney-that-will-profit-fro.aspx#.UsDesvS1yo_

It would seem that superhero movies are starting to become more epic and while DC is looking at combining all their new franchises into a Justice League franchise, Marvel already is sitting pretty with The Avengers and all their upcoming movies.  Fox no doubt wants to capitalize with their products which leaves Sony (The Amazing Spiderman) out in the cold but one cannot rule out a team-up of not only superheroes but of film studios to get their biggest bang for their buck.
Posted by SHADOKP at 9:57 PM