THE DOCTOR REGENERATES IN THE CHRISTMAS SPECIAL, DOCTOR WHO: THE TIME OF THE DOCTOR, PREMIERING DECEMBER 25, 9:00 PM ET ON BBC AMERICA

A full night of programming says goodbye to Matt Smith’s Doctor including: 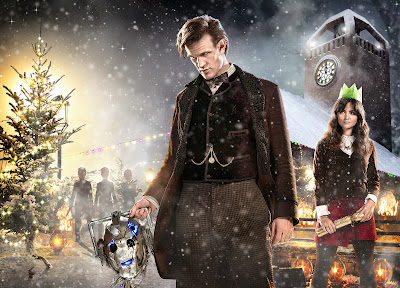 “Eleven's Hour is Over Now, the Clock is Striking Twelve's” – Clara
New York – December 18, 2013 – As the eleventh hour nears, a regeneration is on the horizon, but not before the Doctor (Matt Smith, How to Catch a Monster) and his companion, Clara (Jenna Coleman, Death Comes to Pemberley), enjoy one last adventure. This year’s Doctor Who Christmas special marks the end of the Eleventh Doctor. Through his many adventures, this Doctor has rescued dinosaurs on a spaceship, married his love – River Song and encountered aliens including The Silence, Daleks, Cybermen, Weeping Angels and more. But it was his latest adventure, The Day of the Doctor, that effectively changed the course of his history as we know it when he and twelve versions of himself banded together to save Gallifrey from destruction. Now facing his very last adventure, the Eleventh Doctor receives a signal that brings him face-to-face with a massed force of the universe’s deadliest aliens. What this signal means for his future life is unknown, but when the clock strikes twelve, the Eleventh will be no more.

Join BBC AMERICA for a full day of Doctor Who when the series takes over Christmas. Catch the TV premiere of the six-minute Doctor Who prequel, The Night of The Doctor at 6:00pm ET followed by an encore of the 50th anniversary special, The Day of the Doctor. Then tune-in for the world premiere of an all-new special, Farewell to Matt Smith, a retrospective look back at Matt Smith’s time as the Eleventh Doctor at 8:00pm ET followed by the premiere of The Time of the Doctor at 9:00pm ET.

ENCORE: THE NIGHT OF THE DOCTOR/THE DAY OF THE DOCTOR
Enjoy the television premiere of the six-minute prequel, The Night of the Doctor that leads into the 50th anniversary special. The Doctors (Matt Smith and David Tennant) embark on their greatest adventure across space and time. In 2013, something terrible is awakening in London’s National Gallery; in 1562, a murderous plot is afoot in Elizabethan England; and somewhere in space an ancient battle reaches its devastating conclusion. All of reality is at stake as the Doctor’s own dangerous past comes back to haunt him. The special is directed by Nick Hurran, executive produced by Steven Moffat, Faith Penhale and produced by Marcus Wilson. The Night of the Doctor and The Day of the Doctor airs Wednesday, December 25, 6:00pm ET.

FAREWELL TO MATT SMITH
Bid the eleventh Doctor, Matt Smith, a fond farewell in this hour-long retrospective documentary special about Doctor Who series five, six and seven – the Matt Smith Years. This compelling documentary, narrated by Alex Kingston (Doctor Who’s River Song), features highlights from Smith’s run with interviews from the man himself, his cast-mates, writers, producers, guest stars and famous Doctor Who fans. Doctor Who: Farewell to Matt Smith premieres Wednesday, December 25, 8:00pm ET on BBC AMERICA.
U.S. PREMIERE
THE TIME OF THE DOCTOR
Orbiting a quiet backwater planet, the massed forces of the universe’s deadliest species gather, drawn to a mysterious message that echoes out to the stars; and among them – the Doctor. Rescuing Clara from a family Christmas dinner, the Time Lord and his best friend must learn what this enigmatic signal means for his own fate and that of the universe. Orla Brady (Fringe, Mistresses) guest stars as Tasha Lem. The Time of the Doctor premieres Wednesday, December 25, 9:00pm ET.
CREDITS
The Doctor Matt Smith (How to Catch a Monster)
Clara Jenna Coleman (Death Comes to Pemberley)
Tasha Lem Orla Brady (Fringe, Mistresses)
Executive Producer
and Lead Writer Steven Moffat (Sherlock)
Executive Producer Brian Minchin (Torchwood)
Director Jamie Payne (The White Queen)
Producer Marcus Wilson (True Dare Kiss, Life on Mars)
Posted by DR5WHO at 7:14 PM