Doctor Who - The Time of the Doctor (Spoilers) 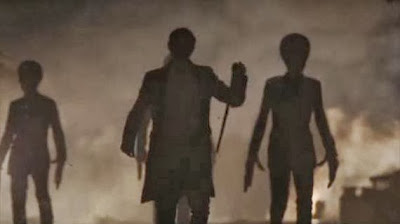 I hesitated in watching this episode as I had heard so many negative vibes online ahead of time. I did not want to ruin a great Christmas with another convoluted Moffat mess but I was curious. I know the 'new' Doctor Who has potential of being very good and very bad but hearing that this latest one might be toward the very bad I was nervous for sure. What we ended up with was a bit of every sort of Moffat produced episode with some very bad and very good. 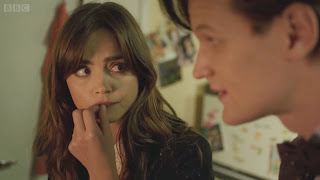 What Moffat does all the time that is incredibly annoying and so wasteful is throw in so many plot lines and tangents. He will often bring in many characters and create a cluster of frenzied scenes that 'show off' Matt Smith's ability to talk fast and crazily. He has done this with the usual “every alien” making an appearance in this story. Shades of “The Pandorica Opens”, we have all the Doctor's enemies once again up against the Time Lord. These appearances are more of a reminder of all of the best aliens from Matt Smith's era. From the Weeping Angels to the Silence to the Cybermen and Daleks, we have some substantial individual scenes with these monsters that helps eat up precious running time of the episode and does nothing more than supercharge our brains as we try to process everything. Individually, some of these scenes are creepy, especially the Angels coming out of the snow but are just quick guest appearances for Smith's final story.

We are then introduced to a new character who is suggestively the Doctor's lover and again, the Doctor and nudity go hand and hand in a running gag that lasts a quarter of the episode. These scenes are very non Doctor Who moments and do nothing except create some cheap guffhaws and give some other fans some scenes where they might be able to use their imagination to see the Doctor and Clara in the nude. Such a tease Moffat.

If you can cope the barrage of hurried alien appearances and complex and forced connections with Christmas, you can then enjoy some excellent acting by Smith and Coleman that are some of the only highlights for the episode. Their acting with other characters is superb, when Smith is serious and perhaps a bit jokey and Coleman is upset. Together, their chemistry is excellent as well but is annoyingly interrupted by an appearance of 11's own version of Rose Tyler, Amy Pond. This appearance cheapens Clara and reminds us how much more important and popular Amy Pond is in the minds of some shippers and others who have not warmed up to Clara. Rose often undercut Martha and other companions for 10 which was so squeeingly annoying for the fans who wanted to leave Rose in the past. Amy rears her big bald wigged head to give Smith his final send off. Thanks Karen. 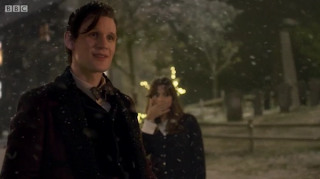 So many other scenes are horrible including the goofy bald Doctor and it was bad when they did it in "Asylum of the Daleks" and it is doubly bad again, the Dalek stalks breaking out of the heads of the humans. Bad.

The Doctor's connection to Christmas is a bit odd and forced as the story cheats the viewers by giving 11 300+ years on the planet with only some very quick narration telling us that the Doctor has abandoned his life of travelling to save a few people who have to tell the truth and live in the snow. The Doctor refuses to answer the question "Doctor Who?" and not since I found myself being asked by Russell T. Davies to pray for the Doctor so that he could change from a shrunken tweety bird like being into good old David Tennant again, have I been embarrassed hearing the title of the show over and over again. The original series would once in a while mention Doctor Who as a knee slapping joke but now it is part of the show.

Again the Doctor is faced with something he has no other choice but to choose death. He spends decades not finding any other way out of his upcoming doom, similar when the War Doctor finally decides there is no other option but to push the big red button. Clara, once again shows us how stupid the Doctor is by asking the Crack to help and if you love the Doctor (is she asking the viewers this?) to help him. The Time Lords believe she asked politely enough and decide to give the Doctor a new set of regenerations.

Wait..... the 11th Doctor was at the end of his regenerations? YES, of course. War Doctor and 10th Hand boy toy for Rose Tyler were the other two. Moffat decided to take care of the question that every fan has had since the limit on regenerations was mentioned in “The Deadly Assassin.” I don't mind him doing this and while it was always a possibility that the Time Lords would give out a new set of regenerations, Moffat did seem to give the process a little push and cheated the viewer out of a few more seasons. The fixing of the regeneration problem was a cop out and perhaps too easy. Speaking of which, the regeneration is a bit quicker than previous ones. Tennant took 20 minutes of screen time to finally regenerate and Smith less than a second seen in this quick GIF below.. The abrupt regeneration did not bother me as much as many other parts of this story and I am really looking forward to Capaldi's Doctor. Everything in this points to the right direction for the show and hopefully Moffat leaves the show in a better condition for his successor than it is right now. Hints over the past couple of stories and season seem to suggest that to be true.

Despite my negative review, I am surprised by so much negativity online. What do you expect? This was not any different than anything you have seen in the past few years. The only thing missing was a winking woman smiling and saying “Spoilers” and the Victorian team making some shoe-horned appearance. 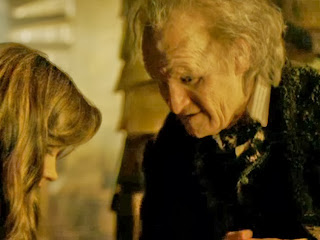 I found the moments with Clara and the final scenes, excising Pond of course, to be touching. I had hoped to be more attached to Matt Smith but I have less connection with his Doctor than any of the previous two (that would be Eccelston and Tennant, not Hurt and boy toy Tennant), despite having some great eccentric moments that have suffered from some poor stories. I did think Smith ended strongly and don't have an issue with his Doctor but I am so looking ahead right now that I am more excited for what is to come than what I just saw.


There have been worse Christmas specials but non as convoluted when it didn't need to be. A few omissions and changes and this could have been an emotional story for us to remember. My expectations were near bottom on this one so it did not totally live down to that. It had its moments and is not nearly as bad or good as many are stating.  How's that for a cop out?

Email ThisBlogThis!Share to TwitterShare to FacebookShare to Pinterest
Labels: doctor who, Matt Smith, Peter Capaldi, The Time of The Doctor