Doctor Who - Farewell Matt: Dinosaurs On A Spaceship 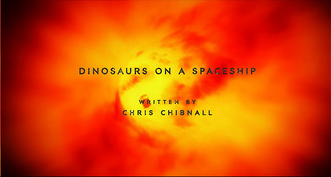 Doctor Who:
Dinosaurs on a Spaceship
By Chris Chibnall

Every once in a while when driving down the road you may occasionally hit a pot hole.  You worry cause the road your on was nice and smooth and there shouldn’t be any pot holes on the road.  You then start to worry if there will be any damage to your vehicle.  Then you vehicle starts to make a funny noise and you really worry that something seriously is wrong with your vehicle.  Well the pot hole in question is “Dinosaurs on a Spaceship” and the vehicle damaged was my brain. I have watched Doctor Who for a very long time.  I have watched some stories that have been less than stellar and walked away with some parts that are memorable whether good or bad.  Well Dinosaurs on a Spaceship has me scratching my head as to what I just saw.  Now for those you have read my reviews know that I generally like everything and don’t usually write that an episode was bad or piss poor especially when it comes to Doctor Who.  Yes I’ve been critical of the show but rarely do I hate an episode.  Well I hate Dinosaurs on a Spaceship. 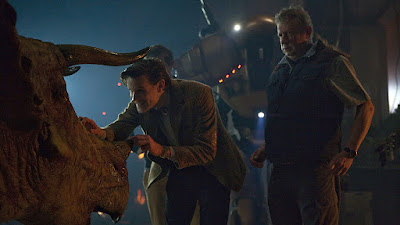 I’ll tell you why.  First off the plot of the story had promise.  Dinosaurs on a Spaceship could have been something special but the dinosaurs was just a gimmick.  Just like with Hitler the dinosaurs were just there to get you hooked in and then just didn’t really amount to much.  Was the original script that bad that Steven Moffat thought “I know I’ll fix it with dinosaurs.”   I don’t buy the way they ended up on the ship.  Yeah the Silurian’s was a nice touch but I don’t buy the idea of them having an ark ship and going across the universe.  I don’t at all because they all would have done that instead of going underground. 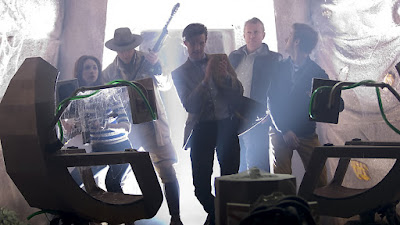 I thought the story had too many characters.  I found that it would have been better if it was just the Ponds and Rory’s dad.  Queen Nefertiti and Riddell shouldn’t have been there at all.  For two people from way in the past they sure seemed way to comfortable being on a spaceship occupied by dinosaurs.  They were way too comfortable and seemed to not question the technology or the fact they were in space at all. Seemed pretty strange to me that the only one perplexed was Rory’s dad Brian.  He was in awe and confused and he was the one from the 21st century.  Anyway I thought there were too many characters and they just didn’t develop properly.  Even the villain Solomon just appeared to be just another thug.  Not much imagination to him. 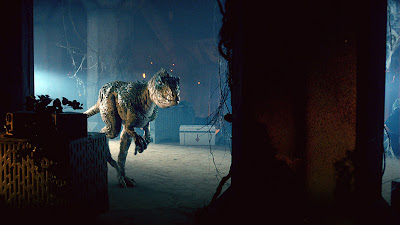 What really got me was how lazy the story was.  Chris Chibnall wrote a good story for Matt Smith’s Doctor with The Hungry Earth/Cold Blood.  That story was really good and very enjoyable.  This story was just blah.  It seemed like a lot of the ideas that were thrown together but did not come together.   There were some good ideas but they just weren’t executed right. The story just seemed uninspired to me with little development.  Dinosaurs on a Spaceship just seemed like a lazy story to me.  I did like the dinosaurs though.  I thought they looked really good even though they were just thrown in as a gimmick. 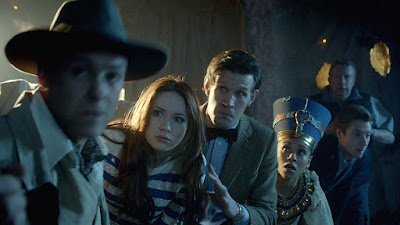 Another problem is what is up with those robots?  I just did not think their voices were appropriate.  Why they made them talk like that was questionable.  Plus I hated the characterization of the Doctor in this one.  He seemed too erratic and to silly.  Way to over the top for him that it just did not seem like the Doctor at all.  The darker Doctor was ok.  It was hinted at last week in Asylum so this is a development they are planning for later so that was ok.  But killing Solomon like that did seem un Doctor like even though explored in the past. 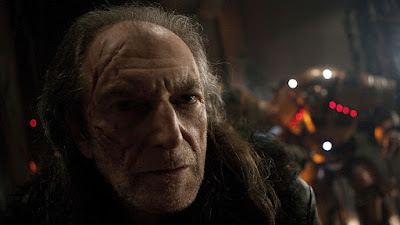 I really liked Brian Williams.  Rory’s dad was actually a character you could relate to.  As a father myself I could relate to him especially the way he asked Rory all the questions plus the look of proudness when Rory treated his wounds and keeping a med kit on him that was touching and a classic scene.   I also loved the scene with him eating a sandwich and looking at the earth.  That was very nice also.

Dinosaurs on a Spaceship will appeal to little kids and well mainly the rose tinted fans.  The diehard fans from way back might not enjoy this story at all.  I did not and had reservations about it way back when the title was announced.  This story just didn’t do it for me and that is quite disappointing.  But that happens every now and again as you hit a pot hole on the road and unfortunately Dinosaurs on a Spaceship is that pothole.

Email ThisBlogThis!Share to TwitterShare to FacebookShare to Pinterest
Labels: 11th Doctor, Dinosaurs on a Spaceship, doctor who, Matt Smith