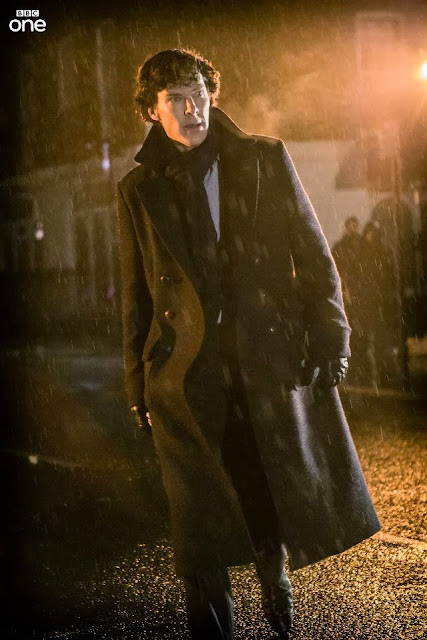 
How did it feel reading the first script of the new series?

It’s always a kind of cold-faced thrill because you get the first enjoyment of it. It’s like being the first audience of the finished product, so it was a real treat. We knew what the rough trajectory was over the three films, but when you get the full script it’s just a delight. The first thing I go to is the big scenes, and every one of those scripts is a terrific read. It’s such a joy to read them for the first time – you get that thrill that hopefully the audience will get when they sit down and watch it.

What was it like getting back into character after a two-year break?

I would say it was easier than the second series, but it’s never completely easy because of the break and because of how extraordinary a character he is. No matter what comparisons people draw between me and him – he is very different in his temperament, he is more mercurial, his rhythms are faster and more aggressive than mine are, and that goes for his intelligence and speed of talking – I feel like I have to ramp up a gear which takes a bit of time to get used to. But you know, I love it and however hard it gets, and it is a tricky one to pull off, it’s a character I love playing and I always feel sad saying goodbye to him.

What do viewers have in store for Series 3?

Without giving too much away there is a fantastic trajectory in Sherlock’s character arc which is going from a position of not really fitting in and then doing incredibly well and forming a bond again with John.

They have some extraordinary adventures in the first and second episodes and then in the third they are challenged by a situation and a master villain who brings him to his knees. What’s exciting about this series is we see Sherlock in real peril. We know from the end of series two he staged his death, he was out of the game but calculating every move and therefore in charge. With this challenge he really is out of control. He really does lose his authority on the situation and it’s really exciting to see a hero in that much jeopardy and it’s very interesting to see what it does psychologically to him.

As far as plot goes, Sherlock and John reunite, there is an explanation and there is a new character in the shape of Mary Morstan - it’s really about how the three of them kind of coexist. It doesn’t become a trio, but she is a leading figure in it, she’s not just a stay at home wife – she is someone who is very involved in both of the boys' realities but it’s a wonderful new dynamic to play with.

What do you think Lars Mikkelsen brings to the series?

An incredibly steely reality which is harrowingly possible. He is a businessman – he’s not a mad chaotic villain, not like the award-winning performance Andrew Scott gave as Moriaty. He is something of great calm and measure that has a depth to it which is an even bigger challenge than the chaos of Moriaty. He is so measured and precise – he is like a shark, a terrifyingly perfect predator of our age.

He will chime with people who know what a bully is - he is the archetypal bully and his means and methods are chillingly everyday in our culture. He’s a smart creation, very real and not fantastical. He’s got a foreign perspective on the English culture which Holmes so perfectly personifies and the fact that he fights on the side on the angels. He sort of reduces what Holmes protects.

Do you think Sherlock will understand John’s reaction to the news that he is in fact alive?

I think he completely thinks that John will understand what he has done, and be fine with it. I think he is expecting a wry smile, a handshake and maybe a laugh or two and then off on a case. He gets it so wrong, so so wrong. He’s rusty, he regresses and it takes him a little while to get on form, to smell out London and understand that again and also to get back to being best friends – you empathise with him because you know ultimately he did what he did to save his best friend’s life. But John being quite a straight-laced ex-soldier is not too happy.

Do you think there is an evolution in their relationship?

They start from a point where they are almost strangers again, they have to have that moment of trust re-established, it’s quite a thing to do to a friend to fake your own death to save a friend, and it takes time.

They rile each other and amuse each other and excite one another and do everything that good friends do but to extremes because of the situation and the friendship just grows through very heightened circumstances and drama.

It’s just a glorious thing to play out and having such a skilled actor as Martin Freeman to play off – the verisimilitude is bar none and his reaction and comic skill is always exceptional. But the real heart of what he does and why he is so funny is because it’s from a place of truth.

In Sherlock you’ve got this ridiculously theatrical, sometimes manipulative but very real friend which makes for a tempestuous but brilliant odd couple friendship with all the dynamics of series one and two, just playing out in very different circumstances.

Do you think we will see any changes with Sherlock’s relationships with Mycroft in this series?

There’s a lovely arc there which gives a lot more insight into them as brothers and where they came from. There is a really interesting glimpse of the hold they have over each other which hasn’t really come to light until this series.

It’s great, Mycroft becomes the bigger brother in every sense – both intellectually and in terms of power. They are brothers in a family, they are blood relatives and that’s explored in more detail which is exciting – funny, but not trite. It’s quite profoundly moving I think.

You find out a bit more about both characters but the most interesting thing is that you find out a lot more about why he is the way he is, you have little hints of back story which just remind people that he grew up – he wasn’t just born Sherlock.

Sherlock was somebody who may have been a little bit different as a child but he is very much self-styled; he wasn’t born the way he is there’s a lot of conditioning that’s made him this genius, thrill seeking, adventurous, crime-solving hero that he is.

If you could have one of Sherlock’s attributes what would it be?

His mental focus, which comes with its faults as well, it’s very hard-earned. What I love about him is he is a hero for people who are different and a role model for people who are different because he acquires a status through his skill that is bar none and I would love to have his mental agility and focus I just think it is exceptional... and his memory, if I can have two!
Posted by DR5WHO at 11:50 AM