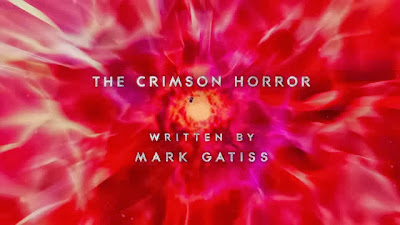 Doctor Who:
The Crimson Horror
By Mark Gatiss

"My people once ruled this world, as well you know, but we did not rule it alone. Just as humanity fights a daily battle against nature, so did we. And our greatest plague, the most virulent enemy, was the repulsive red leech."

Mark Gatiss wrote two stories for Series 7.  His first one “Cold War” was one I really enjoyed.  In fact I enjoyed a lot and consider it one of the best stories of the Matt Smith era so far.   So now he gives us The Crimson Horror a story set in Victoria times, 1893 to be exact in Yorkshire, and sees the return of Madame Vastra, Jenny and Drax to help with the investigation.  Will “The Crimson Horror” be another winner for Mark Gatiss or will it be one that should be put in that vat of poison that Mrs. Gillyflower has in her factory 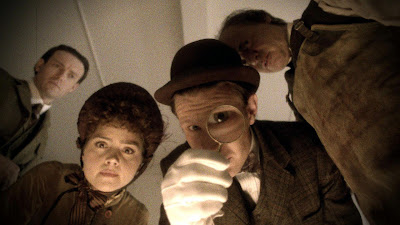 Well there isn’t much I can say about this story except I wanted to like it and it started off good but it just went south pretty quickly and it all started when Matt Smith appeared on screen.  Let me explain.  Everything was actually pretty good with Jenny working undercover in Sweetville looking for The Doctor.  Madame Vastra had a case from Mr. Thursday whose brother had died in Sweetville and the photo they took from his eye was of The Doctor. 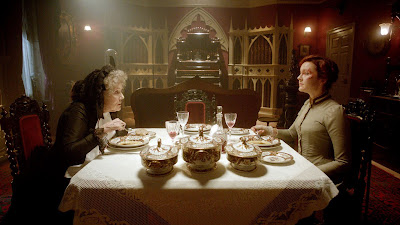 So Madame Vastra sent Jenny there undercover to find out what is going on.  I liked this part of the story as it felt like it could be a pilot or just a Doctor light story with Madame Vastra and her crew taking center stage and doing the detective work. I thought this was pretty good and was really enjoying the story to this point.

But then when Jenny finds The Doctor and revitalizes him in an unexplained cabinet type mechanism it goes south as The Doctor is acting extremely buffoonish and just extremely silly that it is embarrassing. . I still can’t stop laughing seeing him as the monster with his mouth stuck open and him all red.  I had tears coming out of my eyes I was laughing so hard.  I guess that was supposed to be a serious scene.   Kissing Jenny what was the reason for that.  That act made no sense what so ever. 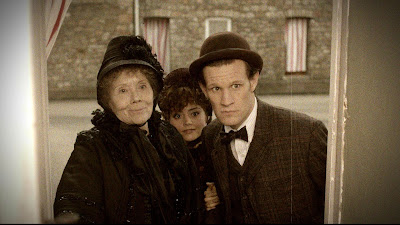 Then the whole story got silly.  Jenny was able to take on a whole mob of the supermodels, Strax showed up in full armor and lazer gun blasting, oh and let’s not forget the GPS boy Tom Tom err I mean Thomas Thomas. What in god’s name was that doing in the story for? It wasn’t funny just an eye roller.  The whole story took a turn as we found out what Mrs. Gillyflower was all about and her plan with the poison.  Launching it up into a rocket and killing everyone in the world from a rocket in Yorkshire apparently.  Even the alien attached to her was kind of lame.

Then there was her daughter Ada who was blind and disfigured.  You had to feel for her as it turned out her mother used her for experiments but then again no as she got attached to The Doctor as he was crimson and called him her monster.  That was kind of weird and sadly pathetic scene to have in the show and didn’t make me feel pity for her that much. What did was when we found out what Mrs. Gillyflower did to her.  But Ada does get the last laugh on Mr. Sweet though.

I did like how they retold how The Doctor and Clara got into that predicament.  I liked that they did something different by making the scenes look old as if they were really filmed in 1893.  I found that to be pretty cool and probably the only thing I enjoyed about The Crimson Horror besides the end credits.   Well that’s not true.  I did enjoy Diana Rigg as Mrs. Gillyflower.  To me she will always be Mrs. Peel from The Avenger or Tracy the Bond Girl from On Her Majesties Secret Service but seeing her is Doctor Who was a delight even if the story was a clunker. For the most part her character wasn’t all that bad but I could never picture Mrs. Peel as a villain. 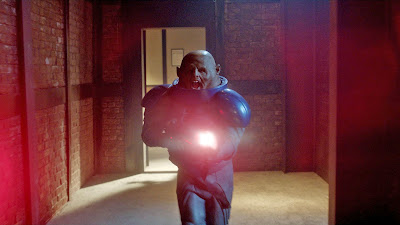 The ending was all jumbled as everyone was chasing Mrs. Gillyflower up to the top of the rocket in a smoke stack hanger.  They get to a point where she has them when out of nowhere comes Strax at the top of the smoke stack and shoots at Mrs. Gillyflower causing her to fall to her death.  Pretty anticlimactic and it was good to see that Strax could climb up there so fast too save the day.  Hurray for the stupid Sontaran.   The Crimson Horror was quite disappointing and not all that entertaining for me and well let’s hope the next one Mark Gatiss writes is better.
Grade D -