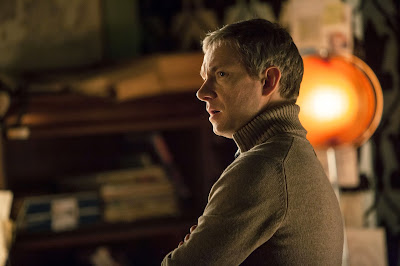 It's Martin Freemans turn to spill the beans on the upcoming three epsidode series three of Sherlock.  But don't expect him to reveal all.


An interview with Martin Freeman, who plays John Watson in BBC One's Sherlock.

What was it like being back together for the first read-through?

It was good – it had a kind of familiarity about it, we had new people joining which was lovely. Given that it was our third time, or fourth including the pilot, it just feels nice and familiar. It’s always exciting because the scripts are so good.

Two years have passed since Sherlock faked his death. How do you think this has affected John and how has be moved on?

His best friend has died horribly in front of him, which took a long time to get over, but the way that his life has moved on is that he has fallen in love with Mary. He is leading a functional, normal-ish life really which doesn’t have the highs and lows of his life with Sherlock but is certainly a bit more steady. But there is a sadness with John which will always be with him when you lose someone that you love – he is slightly dulled by life.

Could you empathise with John’s reaction to Sherlock’s reappearance?

I can completely empathise. If someone came into your life after you thought they were dead it would be a major event, and given that Sherlock is the way he is, he winds John up a lot, and that is when they are getting on! But coming back from the dead - John is hit very hard by that.

What do viewers have in store for this series?

Lars Mikkelsen is fantastic, he is a brilliant villain. For those who will miss Moriaty, which is totally understandable, we have another fantastic nemesis for Sherlock and John – he does it superbly. Of course, having Mary Morstan around is good because that adds another dynamic to Sherlock and John’s relationship and another dimension to John’s life. It was great having Amanda Abbington on board – she was brilliant, I like working with her!

Are you surprised by the massive online reaction to the show?

I don’t think any one of us could have dreamt that there would be that sort of reaction. Never mind online, but the entirety of the success that it has had we could never have dreamt about. People used to ask me about 'The Office'. They would say 'did you know it would be this huge thing?' and there was certainly no way we could of known how big Sherlock could have been. I would have settled for it being a really good show that some people really loved. But the fact that it has been feted and honoured – we could never have spotted that coming.

And the online thing is certainly a thread of our fanbase – and it’s a very vocal one. I think what’s important not to forget is that it’s not the only one, there are so many people who just watch it on BBC One when it comes out and love it. But the online thing is surprising in a way because they have almost created another world, especially if you are over 30 because it still seems like that stuff is really new. Especially the sort of reaction we have had, I mean other shows do get it as well, but we are one of those shows that people go absolutely barmy for. And it’s nice! I’d much rather that than people ignored it!

What do you think it is that has made Sherlock such a global success?

I guess we were lucky in that we already had Sherlock Holmes, who is one of the most famous fictitious characters in literature. Every incarnation of Sherlock Holmes has been of interest to somebody. And it has been a while since it has been updated. The last time I can think of was Basil Rathbone. So it’s a contemporary look at it which hasn’t been done for a while written by three of the best writers around, thought up by two of the best writers around. It’s beautifully shot, beautifully designed, rather well acted. It’s one of those rare things you can be in where you think every single department is storming it. It looks beautiful, it’s written beautifully and it’s well cast.

What is it about Sherlock that inspires such loyalty from John do you think?

He’s a pretty magnetic bloke. He’s very intelligent and there is something mesmeric about his obsessiveness as well. He’s the cleverest bloke that John has ever met and he likes that challenge and the share of the danger as well. Because John is ultimately into danger as well, he is a solider and a doctor so he is around situations that are perilous and a bit tasty, so he responds to that in Sherlock and he just wants to be around him – I sometimes don’t even know why!

What’s been your favourite episode to date?

I have to say the ones that we have just filmed have been brilliant. Before that, probably Reichenbach was my favourite one to do because when we read it I was really, really excited and I thought the finished product was amazing. It was one of the best things that I’ve ever done and am likely to do for a while.

But then I found that about the episodes we have just done. It’s particularly important you end on a fantastic third one and the third episode in the third series is stellar. Everyone’s work on it is great and it’s a Steven Moffat special which is always good, but they are all so good! I was very, very excited when I read this one – it’s one of the best scripts I’ve ever read.