Doctor Who - The Day of The Doctor Blu Ray Review 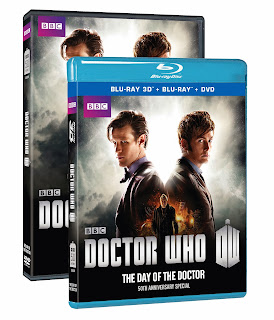 The Day of The Doctor Blu Ray Review

The Day of The Doctor was a wonderful 50th Anniversary special and now it is out on DVD and Blu Ray.  The Blu Ray and DVD have the exact same extras on it and if you’re looking for that Five Doctors Reboot then you are going to be disappointed.

Now the main reason for buying this release is for the story itself and if you want to know what I thought of The Day of The Doctor you can do so by clicking on this link here.   The story of course looks really good in HD and the sound is really crisp also.   The quality of the special is in itself makes buying the Blu Ray worth it.   Now for the extras which for a bare bones release has quite a bit and some are worth getting.

This release also has a couple of pretty good documentaries.  The Doctor’s explained was one of the BBC America specials and is a pretty good introduction to Doctor Who for new fans and is really a pretty good nostalgia trip for the older fans.  It is fun to watch this special and hopefully it inspires newer fans to watch the older Doctor’s.  This was also in the same vein as The Doctor’s Revisited with lots of stars and writers from the show talking about Doctor Who.

The Day of The Doctor release also has the two trailers for the special and of course the Behind the Scenes special that was on the BBC Doctor Who website that for some reason was not made available outside of the UK.  It is great that Colin Baker is the narrator of the behind the scenes special making it an all Doctor affair.

What was unfortunate about this release was that the spoof special The Five Doctor’s Reboot is not on this release.  Hopefully it makes it on another release like the Series 8 mega set or a mini set that will have the Christmas Special The Time of The Doctor and the Docudrama An Adventure In Space and Time.  Fingers crossed for that.

If you don’t want to wait for this release to be in a set and need to watch it now then by all means buy this release as it has a quite a bit to offer instead of just the episode.
Grade A
Posted by DR5WHO at 12:22 PM

Email ThisBlogThis!Share to TwitterShare to FacebookShare to Pinterest
Labels: blu ray, doctor who, The Day of the Doctor