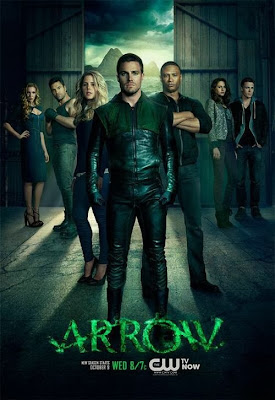 Initial Thoughts – I have enjoyed this show since its first season last year and this year it is really clicking. I like the more down to Earth nature of the show that relies on less super powers and more skill. I also think the characters are gelling better and besides Laurel, like every one of them.

The Plot – the aftermath of the Earthquake in Starling City certainly has led to some major character changes with Moira Queen and especially Oliver and his new plan to kill less. It doesn't always work out. Felicity and Diggle are great and their increased involvement over the past year has been welcome.

The flashback part of the series had been wearing on me a bit but the mid season finale seems to have closed the book on the first chapter of Oliver's stay on the island. Hopefully they will eventually stop with the flashbacks. The inclusion of The Canary is excellent and a surprise twist that I did not see coming not being a reader of the comics.

Despite all this, the finale has opened the door to a new bunch of characters with superpowers, something that I am glad wasn't done initially. I hope this is handled well as it is hard to have non super beings battling characters that are too powerful but we shall see.

The Highlights – The Canary, Barry Allen and the fate of Slade and Shado were all game changers in this series. Felicity (Emily Brett Rickards) steals every seen she is in. As we knew, Captain Jack (Malcolm Merlyn) cannot die and so it will be interesting to see what he is up to.

What's Next? - More super powers, more bad guys, hopefully the show does not lose sight of what makes it good with Oliver battling the bad guys but having a purpose in trying to save the city. Arrow is doing very well in the ratings.