Doctor Who - Steven Moffat Talks About The Time Of The Doctor 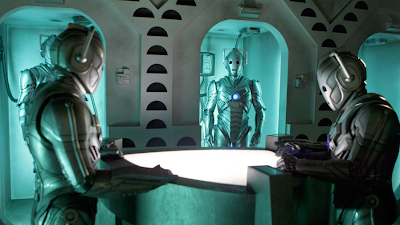 It is the week of Christmas and Matt Smith will soon be The Doctor no longer.  The BBC Media Centre has an interview up with the man who actually does the deed and kills off Matt Smith's Doctor.  Steven Moffat talks about the Christmas Special and beyond.
Source: BBC Media Centre


Can you set the scene for this Christmas episode?

It’s his final battle and he’s been fighting it for a while. The Doctor is facing the joint challenge of a mysterious event in space that has summoned lots of aliens to one place and helping Clara cook Christmas dinner. There are also elements from every series of Matt’s Doctor, which will come to a head in this special. Things that we’ve laid down for years are going to be paid off.

How was the read-through?

It was emotional. I think possibly the beginning of the end is more emotional than the actual end. It was the same with The Angels Take Manhattan, when Karen and Arthur left. The read-throughs are the moments that tend to get people because obviously the shoot dissolves into what we hope will be a tremendously exciting wrap party.

Did you know what you wanted Matt’s last words to be?


I didn’t think I would go that way, but a couple of months before I wrote it I did say to Mark (Gatiss) that I thought I knew what his last moment would be, and indeed his last line. But if it didn’t fit the scene I wouldn’t crowbar it in. I’ve had the vague storyline in place for a long while.

What episodes or scenes do you think will define Matt’s time as the Doctor?

I think ‘The Eleventh Hour’ was such an extraordinary debut. Everybody for a year of poor Matt Smith’s life had been saying, ‘total mistake. He’s far too young.’ Then he came in and he was brilliant. ‘Vincent and The Doctor’ was also such a lovely episode and I was thrilled Richard Curtis was able to write for the show. There’s the physical comedy that Matt has brought and of course fish fingers and custard. I think his relationship with his own TARDIS in The Doctor’s Wife was gorgeous.

What do you think distinguishes Matt from the other Doctors?

I think he does old Doctor better than anybody else. It’s not an accident. It’s something he very, very consciously thought about. Because he was the youngest Doctor, Matt said, ‘he’s only got young skin. Nothing else is young.’ I think Matt makes you think very believably that he is this ancient being.

The Christmas special will introduce the next Doctor, played by Peter Capaldi. What was it about Peter that you thought was right for the role?

He’s one of the best actors in the country and is very beloved. I was at the BAFTAs shortly before we were contemplating Peter and heard the cheer he got from the audience. Nobody has a bad thing to say about him and that’s not a minor issue when it comes to casting a Doctor. They’ve got to be lovely. And he’s a huge fan of Doctor Who. So we asked and he was incredibly excited to come and audition. We didn’t tell him that he was the only person auditioning because that would be oddly pressuring.

Did you deliberately aim to cast an older Doctor?

It wasn’t the reason I cast Peter but I do think if we’d cast another Doctor as young as Matt - because Matt’s been so good at being The Young Doctor - I’m not sure what another one would have done. They’d have to have either been deliberately different or just repeat him.

Email ThisBlogThis!Share to TwitterShare to FacebookShare to Pinterest
Labels: 2013 Christmas Special, doctor who, Steven Moffat, The Time of The Doctor