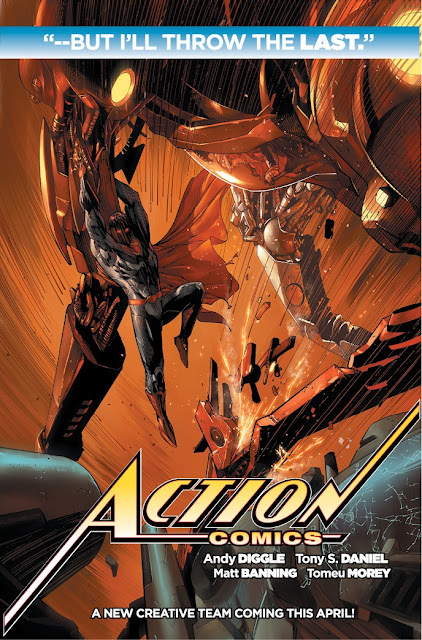 Andy Diggle has left Action Comics after just one issue due to creative differences with DC Comics.  It seems another writer has been having difficulties with editors of the book they are writing and has decided to leave after only doing issue 19 which comes out in April and coincidentally is being heavily promoted in the DC Books that have come out today.  Here is Andy Diggles tweet on the subject.

Sadly, I’ve decided to walk away from Action Comics for professional reasons.

DC Comics has confirmed the departure with a tweet of their own.

Regarding ACTION COMICS - artist Tony Daniel will be expanding his role and taking over as writer and artist for the remainder of the arc.


Andy Diggle was soliciated as the writer for issues 19 to 21 a three part story arc and now former Detective Comics writer and artist Tony Daniel will be completing the story.  No news on who will take over whether it be Tony Daniel or another creative team. Sadly I was looking forward to his run om Action as Andy Diggle is one of the better young writers in the comic book business.