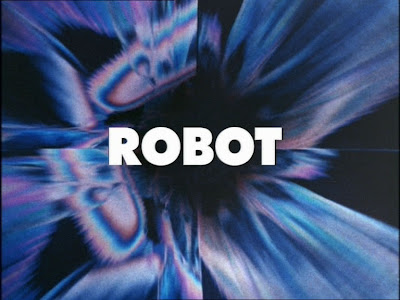 Doctor Who:
Robot
By Terrance Dicks

The newly regenerated Doctor is sent to the infirmary and to the care of Lieutenant Harry Sullivan.   The Doctor seems a bit out of it since he regenerated after battling the Spiders of Metabillis 3 and while he is recuperating Sarah Jane asks The Brigadier for a pass to Think Tank.  Think Tank is a place where scientists are working on new inventions to help out the human race.   Sarah Jane has her suspicions about Think Tank and wants to poke around and see if she can find something out. 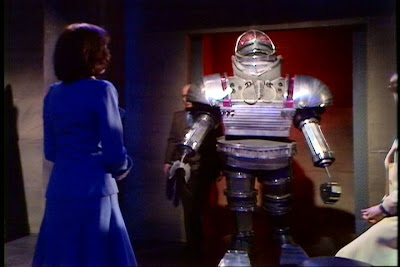 Meanwhile plans and components to make a disintegrator gun have been getting stolen.  The thing is no one knows who is stealing the components but whoever it maybe is really big and heavy as during its escape it left quite the footprint in the ground.   While snooping around Think Tank Sarah Jane slips on what could be oil on the floor.  She gets thinking about the robotics that was explained to her and decides to take a side trip to see Professor Kettlewell.  He explains to Sarah that the Robot he was working on was dismantled and is not still in operation.  Sarah Jane then returns to Think Tank and there she is confronted by a Robot. In fact the one Robot that has been responsible for all the robberies and doing it all for the Scientific Reform Society. 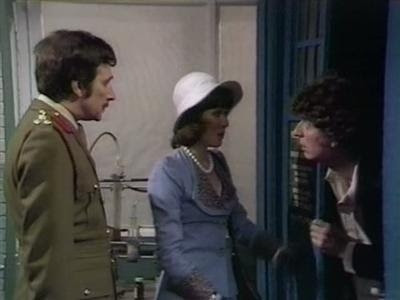 The Scientific Reform Society wants to take over the world and shape it in their image.  Not only did the Robot steal the plans for the disintegrator gun but the launch codes for the three major powers nuclear missiles.  So it’s up to the new Doctor and the Brigadier to stop the Robot and the Scientific Reform Society from launching the nukes and taking over the world. 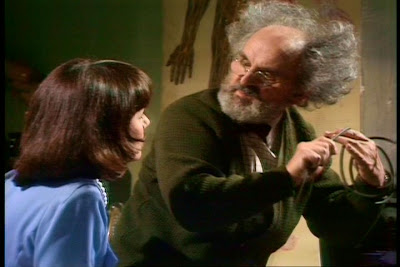 Robot is one of the better debut stories for a new Doctor.   Unlike the ones in the 80’s where the Doctor is hit with post regeneration trauma Robot gets going with the new Doctor finding an identity and well causing grief for Harry and head shaking moments for The Brigadier.  Robot is one that I particularly enjoy and like to watch all the time as it isn’t a story about the new Doctor per say but it is a Sarah Jane story.  Sarah Jane has lots to do in Robot as it is her investigating that uncovers the robot and helps the guys put two and two together.  Plus it is her connection with the robot as she showed it compassion when it was struggling with its prime directive.   This story really showcased Sarah Jane and put her on the path of the Sarah Jane that everyone knows 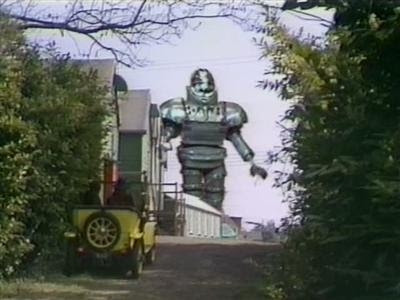 Tom Baker makes a great debut and his performance is very zany and off the wall a big difference from the stern and serious Jon Pertwee.  Right from the start of Robot you can see how great Tom Baker would be. The way he took the part over and immediately made it his own was really good as his zaniness was not really that over the top and made a good first impression.  What also helped in the transition was that the story was a UNIT story and it gave the fans something familiar to them instead of going full barrel with a new adventure and giving them something entirely new right away.   Plus it was an easy to watch monster story in the mold of what Doctor Who is famous for and is one of the classic shows traditional standards.  The story is pretty enjoyable even though it was pretty basic but I love watching Robot even if the robot looks all bulky and disco stylish.  Well I think the robot looks cool even if it has 70’s written all over it.   Robots does have some problems to it but not many to dampen your enjoyment of the story.

So there you have it Robot is a very enjoyable first story for Tom Baker and the start of a 7 season journey that many a fans have warm memories of and it’s also the start of who most fans consider to be the best Doctor ever.
Posted by DR5WHO at 8:06 PM