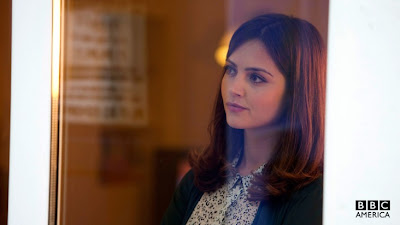 Today it's Jenna - Louise Colemans turn to tell us about Doctor Who Series 7B.
Source: BBC Media Centre


The new series will mark the official introduction of the Doctor’s latest companion, Clara Oswald. Having already appeared in the series opener ‘Asylum of the Daleks’ in September and as Clara in the Christmas special, ‘The Snowmen’, here Jenna explains a little bit about her character and working with monsters.

Very excited, Jenna is talking animatedly about her first series as the Doctor’s companion. It will be fantastic to see the final version with all of the elements put together.

Having made a surprise appearance as one of the Doctor’s most notorious of enemies, a Dalek, in last year’s series opener, audiences have been treated to two different versions of the latest companion.

We’ve had one introduction to Clara in the Christmas special, but not necessarily the same Clara we will see in this series, explains Jenna. But the essence of all the different versions is the same, Jenna continues, she’s very brave and resourceful, a match for the Doctor and an explorer in her own right. She dreams of travelling and seeing the world and wants more than what’s on offer.

So how has Jenna found working with Matt Smith? Just a joy, it really is. He is the most perfect leading man and sets such a lovely tone on set, making the atmosphere so wonderful. There’s not much more you could ask for in your co-star, she says.

The series opener ‘The Bells of Saint John’ is a modern day urban thriller, which sees the Doctor and Clara face a monster in the wi-fi, as minds are uploaded by an organisation run by Miss Kizlet (Celia Imrie). Set in London, Jenna was thrown in to the deep end as she was asked to get on a motorbike… driven by the notoriously clumsy Matt Smith.

I loved shooting in London, says Jenna, it was so much fun. It was one of those moments where I thought “I’m filming Doctor Who, on a motorbike, riding across Westminster Bridge with the Houses of Parliament in the background.” So would Jenna trust Matt to drive her on a motorbike in real life? Well on screen it looks very exciting, but both of us were being very silly as we were so tightly strapped in. I just clung on!

As the newest edition to the show, Jenna explains how this series will take the viewer on the same journey of discovery she experienced when she first joined, especially for episode two ‘The Rings of Akhaten’ which is set on an alien planet. It’s one of my favourite episodes, says Jenna, it’s so weird and wonderful and something that only this show can offer. It show’s Clara for the first time what life with the Doctor will be like. It’s a complete fantasy, she continues, and it’s great for audiences as the story begins again and we get to explore all these strange new worlds together, as well as getting to know the Doctor again.

The third episode, ‘Cold War’, set on a Russian submarine marks the return of the classic Doctor Who monster the Ice Warriors. They were terrifying, exclaims Jenna, I think this is the first time Clara is really, really scared. The whole set was really realistic and built to size, which wasn’t too much of a problem for me, she jokes. So how did they make it look so realistic? Before every take they would come and spray us, the whole make-up process was reversed as they would damp us down in the morning and rub my mascara off! We were soaking wet for two weeks.

So having completed filming and watched most of the episodes, does Jenna have a favourite? I really like 'The Rings of Akhaten' as and it’s the first proper adventure for the Doctor and Clara.
Posted by DR5WHO at 1:00 AM

Email ThisBlogThis!Share to TwitterShare to FacebookShare to Pinterest
Labels: doctor who, Doctor Who 50th Anniversary, Doctor Who Series 7, Jenna-Louise Coleman