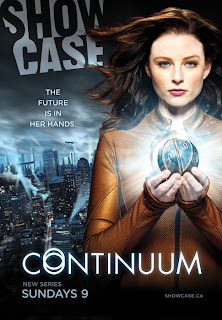 2077 As a new recruit, Kiera Cameron is given a quick orientation of the headquarters. It is here she gets her chip implanted and activated and her CMR (Cellular Memory Recall) wired into her cortex. Informed that she is now a passive recorder and her CMR can hold 36 hours of video for use in court. She is next given her service weapon and a multi tool and is told, “Don’t trust your gut. Trust the tech.”

2012 Eight members of Liber8 were sent back in time, however Kagame didn’t make it. Stefan Jawarski (Mike Dopud) was killed in episode 1. Although five of the six remaining members want to return to 2077, Matthew Kellog (Stephen Lobo) has other ideas.  He desires to remain in the present, taking advantage of a life still free of the Corporate Congress and to use his knowledge for financial benefit. Lucas Ingram (Omari Newton) is a scientist formerly in the employ of SadTech. He has been working on a way home using the time travel device still in their possession. He theorizes the local power substation can supply what is needed to accomplish this. As the group heads out, Kellogg asks them to pass his regards on to their brothers at home.

Back at the police station Kiera, under the alias Linda Williams from Portland, is outed as members of the Portland PD arrive with no knowledge of who she is. Placed under arrest and in interrogation, Kiera avoids Carlos’ angry questions as to her identity. As she’s talking to him, she presses her thumb against the one way mirror. Alec takes his cue and scans her print into his computer.
Outside interrogation Carlos is talking to his boss, Inspector Dillon (Brian Markinson). Dillon hypothesizes Kiera could be a part of Liber8 as she is always one step ahead. Carlos counters that his gut is telling him this is not the case. 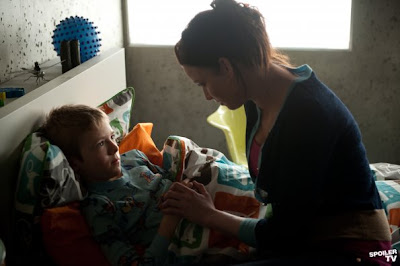 On their way to holding, Carlos and Kiera are in the elevator when the power goes out and a call comes in on the radio that there is trouble at the substation. Through Alec, Kiera realizes what Liber8 is doing. Electricity comes back on and Kiera tazes Carlos with her suit and cuffs him to the elevator much to Alec’s amusement.  She escapes the police station and Alec helps her to steal a car by using her suit as a remote keyless entry device. After a few quick driving instructions, she races to the substation. Unfortunately, she has arrived too late. Not enough power was provided for the time travel device and Liber8 has moved on.

Alec shares a picture of an award winning scientist, Dr Frazer, who wrote a paper on fusion reactions. He suspects Liber8 will learn of this and plan to harness this power to activate the time travel device. Kiera rushes to Frazer’s home only to discover he has been kidnapped by the terrorists. On her way to the University where the linear collider is, she contacts Carlos.

When she arrives at the station, Alec realizes her intentions are to go home with the group. He’s visibly saddened by this. He reminds Kiera that she doesn’t know what future she is going home to, however she tells him she’s willing to take the chance.

Using the invisible application of her suit, she is able to sneak up on Sonya Valentine (Lexa Doig) and take her hostage. She bargains for the release of Dr Frazer and the group is forced to accept her truce in order for all to go home. As Lucas sets the device Kiera remembers a night she was tucking her son into bed after becoming a Protector. She promises she’ll be there to tuck him in, but when she can’t she’ll wake him up to tuck him in again.
Lucas starts the process and an ensuing explosion signaling failure. Truce ended, Liber8 shoots their way out and Kiera turns herself in as the VPD arrives. She is taken back to the station for processing.  Her previous memory continues as she leaves her son’s room and Greg chastises her for making promises to the boy that she can’t keep. Tears fall in the present.

While awaiting her fate with the police, a grieving Kiera’s new identity is discovered. Alec has placed her as a special agent deep under cover. Dillon asks her to stay on as a member of a task force he is setting up to deal with Liber8, and to partner with Carlos. 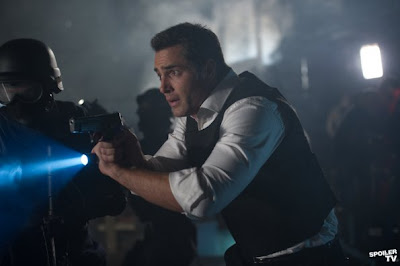 One thing I did not understand in this episode, and I may have missed it, is why the five members wanted to go home. In episode one, Lucas tells Kiera the jump was supposed to be back 6 years. Is this the reason? They are unhappy so far in the past? Are they without purpose minus Kagame?
I like the contrasting themes that unfold in episode two. We begin to feel the reality of a wife and mother facing the prospect that she may never see her family again.  Yet we have another character from the future who is seeking his family in the present as Kellog makes contact with a girl he believes to be his grandmother.

In 2077 Kiera is told not to trust her gut. Outfitted with the highest level of technology, it seems like all humanity is taken out of the law enforcement of the time. Yet in 2012, Carlos responds to his boss that his gut tells him Kiera is not a terrorist.
Overall, I thought this was a very solid episode. The characters are beginning to flesh out. As the story unfolds, questions are forming. And the best thing is, it only gets better from here.
Posted by DR5WHO at 10:05 AM