Doctor Who - Destiny of The Doctor: Shadow of Death Review 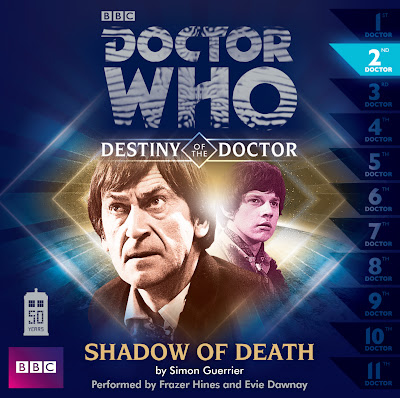 Doctor Who
Destiny of the Doctor:
Shadow of Death
By Simon Guerrier
Performed By Frazer Hines & Evie Dawnay


The Doctor, Jamie and Zoe have appeared to have landed on outpost on a planet that is orbiting a pulsar star.  The scientists there are studying an ancient city that appears to have been abandoned.   What makes its interesting is that they appear to be in a type of time field where time is going differently for those at the outpost.  It appears that there is a being also on the outpost that is killing the crew members.  The Doctor discovers that if the being touches you it makes you age rapidly and die instantly.  So its up to The Doctor and a very peculiar message to help save the day and make sure no one else dies.

What was really cool and a nod for us fans was the message that the 11th Doctor gave the 2nd.  In the first story Hunters of Earth The Doctor received a message from a DJ over the radio.  This time The Doctor receives his message from the psychic paper that was left like a note on the window of the outpost.  It was a pretty cool moment as the 2nd Doctor and 11th Doctor meet very briefly.  Definitely the best part of the entire story.

So far the Destiny of The Doctor series has been really good and spot on in recreating the eras of The Doctor the story pertains to.  Even though the story is under 90 minutes on one disc it doesn’t feel like it is short as the action moves briskly. I have really enjoyed the first two entries in this series and am looking forward to hearing the story unfold in the coming months.