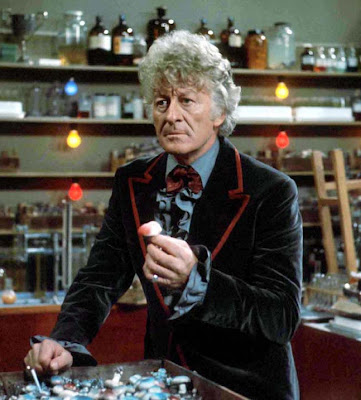 “Obviously the Time Lords have programmed the TARDIS always to return to Earth. It seems that I am some kind of a galactic yo-yo!”

Jon Pertwee took over from Patrick Troughton and had the task of taking the show in a different direction and helped keep it going as it was almost canceled.  I think we all know he succeeded in doing that.   Plus he was The Doctor of action and his Doctor used his mind to come up with gadgets that helped in him saving the day from all the alien threats that happened.

Jon Pertwee’s Doctor was bad tempered at times and quick to blow his stack but look at it from his point of view.  He was exiled to Earth and lost the knowledge to operate the TARDIS and plus The Doctor had to deal with The Brigadier all the time.  H Yes he can be quite rough at times but he also had a tender side one that you can see all the time he traveled with Jo.  Yes he snapped at her, and frankly she did deserve it at times, but he really had a soft spot for her which was quite evident at the end of The Green Death.  You knew by his reaction from Jo leaving him that he did and that makes the tough and gruff Time Lord a big softie at heart. 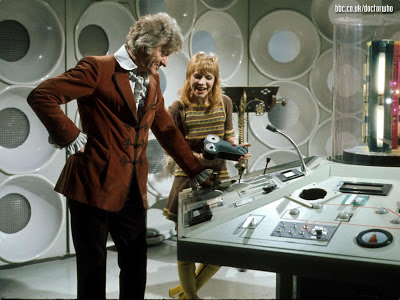 The Third Doctor’s era was indeed different from anything they have done so far on Doctor Who.  The Earth bound adventures were a lot different from finding trouble on alien planets or in Earth’s future or past.  Instead The Doctor was stuck in present time and had to deal with the threats that came to him.   The Doctor had to deal with threats like The Sea Devils, Silurians, Autons and of course that renegade Time Lord The Master.   I think that is where this era has most of its charm and best stories of the era.  The first three seasons where really well done and gave the show a something for the fan to link with as these adventures where taking place in England during the present day. 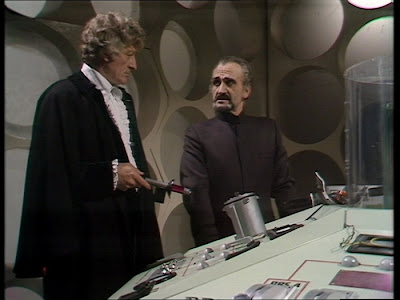 The highlight of the Jon Pertwee era and where a lot of his best performances and stories are is in season 8.  Season 8 is of course The Master season.  Jon Pertwee and Roger Delgado had such a wonderful chemistry that it was a joy to watch these to pros work together and give us some wonderful moments in the shows history.  You can really get a sense of appreciation that the two foes have for each other and it is a shame that in subsequent pairings that the show runners neglected to bring this aspect to the fold.   I loved Season 8 as there was a lot of good stories in that season like The Mind of Evil, The Claws of Axos and The Daemons.  Classic stories that were written well and left you entertained and satisfied.  Season 8 goes down as one of the best seasons in Doctor Who and one of the finest for Jon Pertwee. 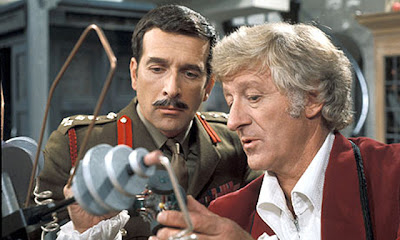 Jon Pertwees Doctor was a man of action and has been often called the James Bond Doctor.  I think what I enjoy about Jon Pertwee’s Doctor is that he relied on his intelligence and did not rely on the sonic screwdriver that many of his predecessors did manly Doctors Ten and Eleven.  He would think up gadgets and then make them to help him fight off the threats to save the world.   That’s right intelligence and by being clever something they should bring back to the show.  Plus you have to love Jon Pertwee’s fighting skills whether it be sword fighting against The Master or using Venusian karate against a villain he was a Doctor that would resort to fist a cuffs if challenged.  I loved that about him truly a man of action. 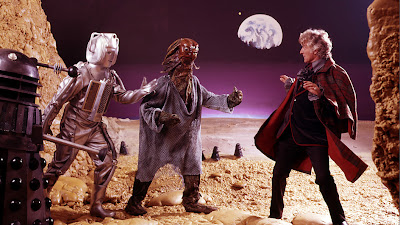 So here is to Jon Pertwee the Third Doctor the man of action and the one who helped keep this wonderful show going as it was on the brink of death.  He was a Doctor who was wonderful to watch and always had a gleam in his eye no matter how dire the circumstances.  Jon Pertwee was brilliant as The Doctor and like the fellows before and after him should be remembered and marveled at what they brought to the legend of The Doctor.
Posted by DR5WHO at 7:12 AM