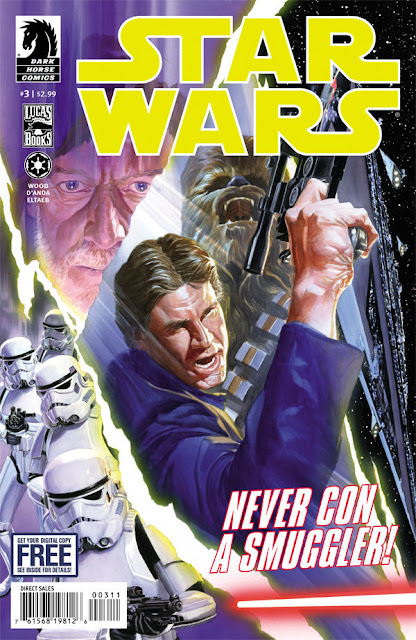 
The Third issue of Brian Woods Star Wars comic book is out and this time he brings the action.   We have Han Solo and Chewie meeting up with Mon Mothma’s agent and before all you know it all hell breaks loose as Imperial Stormtroopers arrive and all hell breaks loose.   It appears that the agent wasn’t all he cracked up to be and Han and Chewie have to shoot their way out of the building the meeting is taking place.

Meanwhile Leia appears to be getting things going looking for the Imperial mole that has infiltrated the Rebel Alliance.  But things are not going so smoothly as Leia seems to be getting jealous of Luke and his friendship with fellow pilot Prithi.  It seems Luke has been spending time with her and since they came back latte from a scouting mission in the same X – Wing, well, need we say no more.  All this and Darth Vader begins his punishment on the lowly Star Destroyer The Emperor has assigned him to.

I have been really impressed on how good the new Star Wars comic book has been.  Brian Wood has been setting up an excellent first story arc that keeps me interested to see what is going to happen next.  I love the Han Solo arc that is going on as it seems to be the one with the most action and seems to have the most going on.  Plus its Han Solo and Chewie so of course it’s pretty cool to see them back in action as they should be.

The Luke and Leia story arc is going slow and you can tell it is building up to something big. The mystery is pretty good and I’m sure when we find out who the spy is it will all make sense in a big way and also I believe it will tie in to what new Imperial bad guy Colonel Bircher has planned and looking at the last page of the book it looks to be something big.  So if you are not reading this book and a fan of Star Wars you should do yourself a favor and but this book as it is really good to read Star Wars the way it should be.