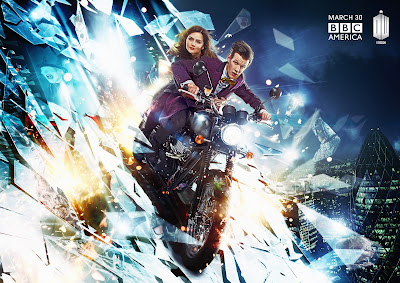 With Doctor Who back on our televisions Saturday everyone is getting excited for its return.  We have The Doctor getting a new companion in Clara played by Jenna – Louise Coleman and some returning villains during this run of series 7. It all starts with The Bells of Saint John on Saturday a mere few hours away and Steven Moffat joined a press conference call, which I was lucky enough to be part of, to discuss The Bells of Saint John and the upcoming season.

To start off with Steven Moffat was asked about Jenna and what she will bring to the series as Clara.


Clara is always just a little bit out of reach not in I mean, you know, obviously, you know, secretly devoted to him but a little bit harder to impress. She's tough, she's fast and she's hard to impress exactly the way the Doctor generally speaking doesn't like them but of course he's absolutely devoted to Clara.  That's very much driven by Jenna's particular style, which is it's a very, very fast, snappy style. A very, very beautiful girl but there's a real sense of toughness in that face of someone that, you know, who can be a real adversary if she wants to be.

He also explained or in true Moffat fashion if this Clara is the same as the previous ones.

He then was asked if there were any particular favorite episodes this season or highlights.

I think they’re a number of highlights. I think The Bells of Saint John is a great episode I think Cold War is a terrific traditional episode. The Ice Warriors. I think we’ve got a great finale. We've got some new Cybermen. But you know I change my mind all the time about which my favorite is and it's almost invariably the next one.

What I thought was pretty interesting was the appeal of Doctor Who on America and the rising popularity and how the stories are easy to get into and has such a world wide appeal.

Accessibility in a way, I mean, you know, you can start watching Doctor Who at any point in its history. You don't have to catch up with the rest of it. It's a very simple myth. It's a man that can travel anywhere in time and space inside a - in a box bigger on the inside.

That’s as much format as we have. You can join it anytime, absolutely get a hold of it and, you know, dare I say I just think it's one of the great pieces of television entertainment that's ever been.
That's why we latch onto it, it's terrific, it's simple to understand what it's about and it's hugely entertaining and every so often it completely reinvents itself to feel at home in its new era, which is really is key ingredient.
It always feels at home in the present day because it always adapts itself. We are after all our eleventh leading man.

He then starts talking about the Spoon Heads and if they wil be high up on the scare meter.

I never really know which ones are going to be the big scarers and so on but I would say that I suppose that The Bells of Saint John is an action roller coaster. Where the Weeping Angel stories and the Silence story were more consciously designed to be sort of scary adventures. So I think, you know, it isn't really up to me it's up to the kids to say which one gives them nightmares so I'll not prejudge it.  I think they're quite creepy, I think it's a roller king adventure ride I think it's a cracker of an episode but let's wait and see what the audience think.

He then finished up by answering a question about the return of The Ice Warriors and how it came about that they returned for series 7 and this is in fact the really interesting answer he gave.
The impetus really was Mark Gatiss I wasn't that keen initially on that of bringing the Ice Warriors back. They've never been any special favorite of mine in the old series. I thought they were good but I never quite got into them but Mark Gatiss kept nagging me about bringing them back and then he came up with an idea, which - I'm going to leave that as a surprise in Cold War, which
really made them come to life for me.I think that could be brilliant. So at that point I really got into it but that was into Mark's creativity rather than mine. The challenge, well there were a number of challenges I can't talk about but one I will talk about they are far, far less familiar to the general audience than say the Dalek or the Cybermen or any of those things.
Where you feel you have to bring the changes a bit with the look of them because, you know, they're very familiar. With the ice warrior they wanted to create a really good super duper version of the one that's already there.So it's a design classic buffed up a bit for HD rather than change or revise I would say and that was the challenge to make. The one that they designed for the fuzzy old televisions work for the other less forgiving HD cameras of the day so that would be the answer.

The continuation of Series 7 of Doctor Who starts Saturday March 30 at 8PM on BBC America.
Posted by DR5WHO at 7:48 PM

Email ThisBlogThis!Share to TwitterShare to FacebookShare to Pinterest
Labels: doctor who, Doctor Who Series 7, Steven Moffat