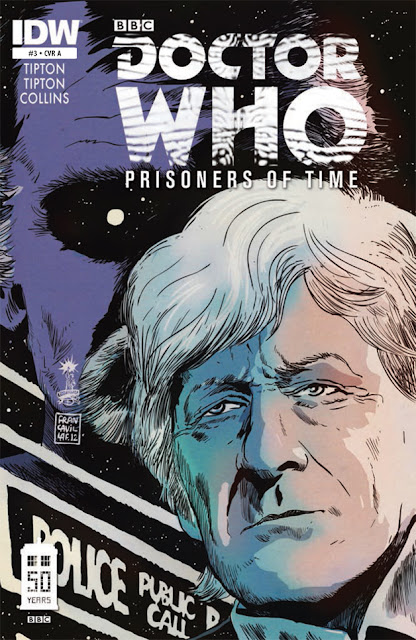 The Doctor and Sarah Jane return to Earth and are greeted by Liz Shaw.  She explains to The Doctor that the Brigadier is acting weird and issuing orders that are very questionable.  The Doctor soon discovers the Brigadier he has been taken over by an alien called Remoraxian.  The Remoraxian is an alien that likes to turn planets into 100 percent water and since Earth is mostly water it is ideal for the Remoraxians to invade.  So it’s up to The Doctor and UNIT to once again save the world from an alien attack.

The third issue in IDW’s anniversary tale was one that actually felt like a story from that particular Doctor’s era.  It felt like it could fit in quite well with the Pertwee stories as it had action and of course a gadget made by The Doctor.  It even had a shoot first over reaction from a certain politician also.

What I did not care for was how easy it was to defeat the Remoraxian.  It wasn’t all that difficult and was really a letdown. All they did was tell them that nukes were launched against England and their base and they simply left.  Yep that’s it a big letdown to a story that was actually quite entertaining for the most part. It’s too bad that the story had such a ending that felt rushed and well it made me believe the writers did not know how to end it.

With that said the last page made up for it as we get a better glimpse of the villain and The Doctor sees who is taking his companions out of time.  That part was pretty intriguing as I’m sure people might be guessing who it might be.  So in all an issue 3 was pretty decent with a poor conclusion but a cool cliffhanger.

Email ThisBlogThis!Share to TwitterShare to FacebookShare to Pinterest
Labels: 3rd Doctor, doctor who, Doctor Who 50th Anniversary, Doctor Who Prisoners Of Time #3, idw