Doctor Who - The Bells of Saint John (Some spoilers)

Doctor Who
The Bells of Saint John
Review by Ken Parker 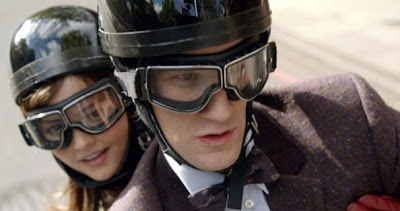 So can Doctor Who's second half of season 7 build upon some stability of excellent stories and less frazzled mayhem that plagued season 6? The Christmas special – The Snowmen did have some great ideas and moments but the series appears to never want to stop expressing its political and social opinions while also having the need to tell us what to think and not allow its viewers to do it for themselves. Having characters literally facing the camera and telling us that the Doctor is great, traveling with the Doctor is dangerous and that aliens and strange happenings, even in Victorian years is okay and most people are fine with it no matter what is not what I want to see in Doctor Who. Allow me to think for myself and enjoy the adventures without constantly being told with winks and nudges all the time. One criticism of old Who was it took itself too seriously but new Who seems to be full of itself.

Anyhow, despite the attempt to make Doctor Who self indulgent and almost an advert for the series itself, the show seems to be trying to make some good stories and Asylum of the Daleks, The Angels Take Manhattan and to a degree A Town Called Mercy all were pretty good and The Snowmen had Jenna Louise Coleman and Matt Smith in an excellent chemistry mix that overshadowed the biting snowflakes and ludicrously mishandled Vastra and Jenny.

Hopefully this second half of the season will improve it's good story count.  Does The Bells of Saint John add to the good count? 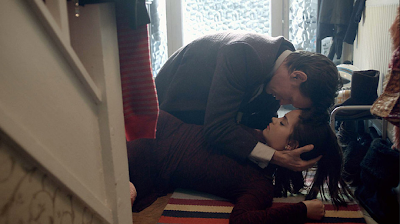 The Bells of Saint John sets up the entire half season with the Doctor trying to figure out Clara Oswald. Starting with The Snowmen and leading into this story, the Doctor's attraction to her is almost awkward as he seems to be head over heels in love with her. We all know that it would be totally out of character for the Doctor to fall for a companion in that way but he is attracted to mysterious people not to mention outgoing,
trouble seeking people (young girls) who he can convince into going with him. The fact that Clara is the “impossible girl” is all the more reason to make her his companion. 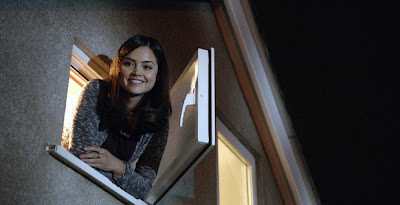 Her return attraction is probably due to his eccentric actions and being thrown into danger. There may be more to it as this is the third time she repeated the “run you clever boy” statement. The first time was in context but the last two are just random inclusions for the audience similarly to Bad Wolf and the Rose appearances throughout season 4. Both of those little viewer Easter Eggs had explanations that made some sense but so far the Clara Oswald catch phrase does not.

The connection with the G.I. is obvious and could be the primary reason for the “impossible girl” situation and even though writer Steven Moffat has not recreated his superb writing in a few years, his final explanation will no doubt be clever and hopefully derivative of the story and not something tacked on just for the audience to point and spit their drink at the TV screen.

Moffat manages to give us some of the scariest monsters for the show and the alien wi-fi duplicate constructs are even more terrifying in the same way that the Autons were scary in the 70's. The loss of identity and in this case both the Doctor and his companion are seemingly lost.

The entire episode was void of those “Oh, No” moments I usually have when something stupid happens. I am not sure why but riding a motorcycle up a building side is acceptable while riding a dinosaur on a spaceship is not – to me. 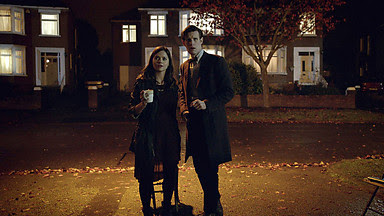 Actually, the episode had lots of little moments that make this series endearing.  Clara walking around for a long period of time with her cup is one of those little 'real' moments that sells the entire story and character.  This is something a real person might do.

Jenna Louise Coleman is an interesting companion and has already made me forget about the easily forgettable Amy Pond. Her acting seems sincere as if she is enjoying herself. Normally I would not like that because I think the role of the companion needs to be semi realistic and beside Donna Noble and to an extent, Rory, there hasn't been one since Rose. Still, I hold hope that the character of Clara will be explained as usual with Moffat's mysteries. The chemistry between Matt Smith and Jenna is the best of all companions and guest stars to date for Smith and hopefully the two of them will be left alone in some of these stories and not be crowded by Victorian Silurian and Sontarans and spoiler filled, winking blondes.
Posted by SHADOKP at 9:00 PM

Email ThisBlogThis!Share to TwitterShare to FacebookShare to Pinterest
Labels: doctor who, doctor who season 7, Jenna-Louise Coleman, Matt Smith, The Bells of Saint John