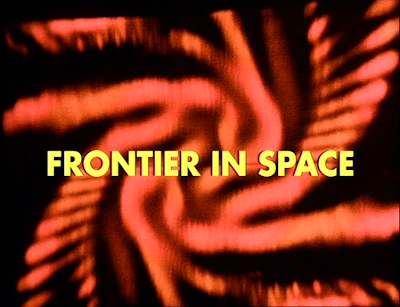 Frontier In Space
By Malcolm Hulke

“You know as well as I do that this man does not fear death. I want him to suffer a much worse punishment. Look, my skill and cunning has brought about this war which will make you the masters of the galaxy. Leave the Doctor with me, and let him see the result of that war. Let him see the galaxy in ruins. Let him see the planet Earth, that he loves so much, in ruins, then exterminate him.”

WAR, WAR, WAR !!!!  War is on the horizon between two of the mightiest empires in the solar system.  Earth and Draconia are on the brink of war.  Each government is accusing the other of attacking its ships and stealing the cargo on board.  Of course each government denies the accusations but the trust between the two empires is wearing thin.  Each planets population is banging the war drum looking for blood in retaliation to the attacks. 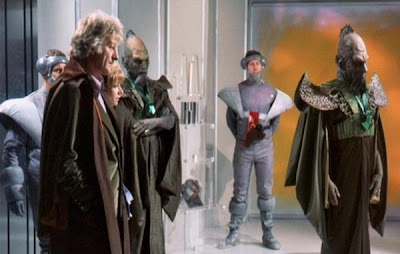 The Doctor and Jo seem to be stuck in the middle as they are quickly accused of being enemy agents.  While on an Earth ship that appears to be attacked by Draconians Jo sees something else.  Jo in fact sees Ogrons instead of Draconians.  The problem is The Doctor and Jo can not get the two governments to believe them and the Earth government puts The Doctor on the moon in one of their prisons.  Then The Master shows up and all becomes clear.  Or does it? Or is The Master doing all this for a 3rd Empire? That Empire is none other than The Daleks an Empire that has been dormant for a while and would love to see a war between Earth and Draconia so they can swoop in and take over the universe. 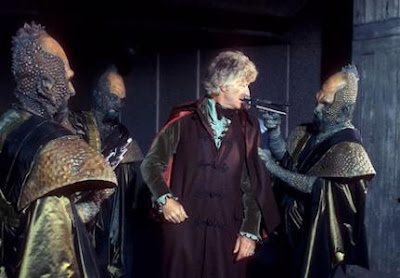 Frontier in Space is one of those stories that just works really well despite the length and what message it is trying to convey.  Here you have a story where The Doctor gets captured and escapes and gets captured again but it doesn’t feel like that is happening all the time.  It feels like a quest for The Doctor to try and get both sides to see that they are being duped.   It is a pretty good story of cat and mouse with a third party, in this case The Master, trying to cause trouble and get a series of events to benefit him and those he is working with The Daleks.  It would have been interesting to see what The Master would have done if he had won. Would he turn on The Daleks or would the turn on him and exterminate The Master.  We’ll never know but I always speculate about that whenever I watch Frontier in Space. 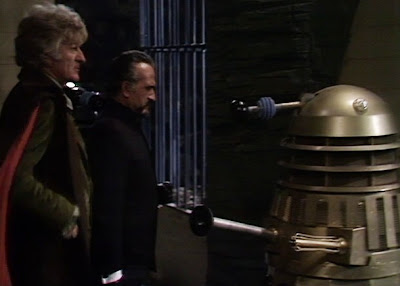 I liked all the sub plots in this story.  I enjoyed seeing The Doctor on the moon trying to escape and seeing Jo trying to escape from The Master. Loved how she was able to prevent herself from being hypnotized by The Master by reciting nursery rhymes.   I liked seeing the Ogrons have a bigger role this time and seeing them be a bit more ruthless even if they are still imbeciles and at times it appears they are driving The Master to drink.    What was pretty interesting was seeing how this story linked into the next story The Planet of the Daleks.  With The Daleks surprise appearance in episode 6 was quite exciting at the time as you did not expect it.  No internet to spoil the surprise is the main reason and boom surprise The Daleks show up.  Pretty cool twist they added. 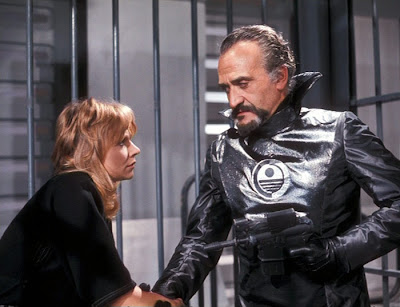 This the last time Roger Delgado played The Master on Doctor Who. Roger Delgado died not that much after filming this in an automobile accident in Turkey. His portrayal of The Master is the best of the lot of actors who would take on the role of The Master.  He brought a charm and subtle evilness to the character that has yet to be reproduced. His Master was the sanest of all of them and you could really get into what makes The Master tick by watching Roger Delgado.  He was brilliant as The Master and he sure was the best Master of them all.
Grade A
Posted by DR5WHO at 1:40 PM