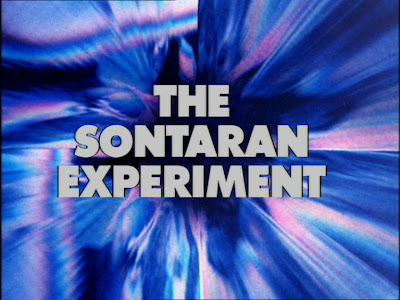 Doctor Who:
The Sontaran Experiment
By Bob Baker & Dave Martin

“Your Waterloo, Marshal. Your intelligence mission has been destroyed and your invasion plans are in our hands. One move across the buffer zone, Marshal, and your entire fleet will be destroyed.”

After the events on space station Nerva The Doctor, Harry and Sarah Jane have transmated to Earth to fix the faulty transmat component.    They soon realize that they are not alone on Earth a planet that is supposed to be deserted.  Harry and Sarah decide to go and investigate and as you would know Harry falls down a hole that was covered up as if it was a trap but a trap for whom?  Sarah decides to go and get help but runs into Roth who says they are being experimented on.   Meanwhile The Doctor hears a scream and goes and investigates. What the Doctor doesn’t know that the man he finds dead was fleeing a robot that is sent out to capture the humans to be experimented on by his master.

The Doctor is then accused by the rest of the crew that had crashed on Earth. The Doctor tries and explains that he is from Nerva but to no avail. Sarah and Roth end up freeing The Doctor and head for the hole Harry fell in.  Harry is no longer there as he found a way out of the hole.  The Doctor ends up falling in himself and finds the way out that Harry found.  The robot then captures Sarah and Roth and brings them into and to the being that is doing the experiments. To Sarah’s horror it is a Sontaran that is doing the experiments and he is doing this as research for the Sontaran invasion fleet. 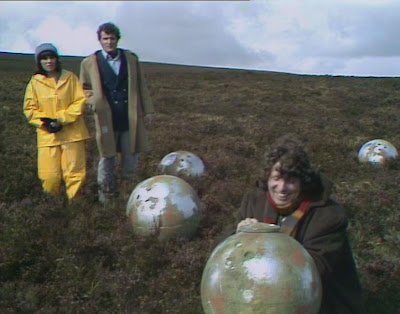 The Sontaran Experiment is a fun story to watch.   Even though it is the shortest story of the Seventies it does have a particular charm to it.  I do like the fact that it is filmed entirely on location and it does give the viewer a sense of an Earth that is just coming back from being damaged by solar flares.  Plus they had good weather as it looked cold and rainy and not bright and sunny which does help with the atmosphere of the story. 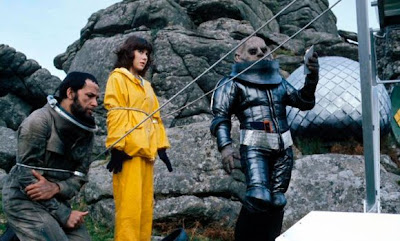 I love seeing the Sontarans return in this story.  Styre has a minor role and is mainly conducting test but he does have a good fight with The Doctor.  I like how he is lumbering around and doing his experiments on the humans from the GalSec colonies that crashed there.  Seeing the Sonataran trying to see what makes a human tick and what our limitations are is a brilliant story and one that its in perfectly with Sontarans.  Plus it has a cool cliffhanger involving Styre as he comes out of his ship and sees his new specimens to experiment on and then takes off the helmet.  That scene is pretty cool and makes the story memorable. 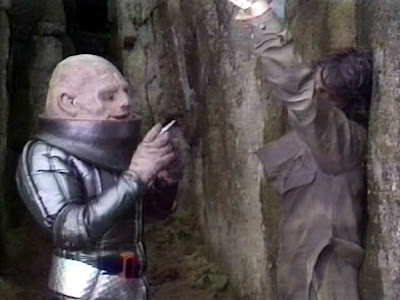 The Sontaran Experiment also has a very funny looking robot. It is one of the flimsiest things I have seen and it seems comical that it would hold up to the rigors of Earth in an area that is extremely rocky.  Plus all it took was for The Doctor to use his sonic screwdriver on it and it crumbled to pieces.   The noise it made was pretty funny also.  It makes you wonder how it snuck up on people and captured them. I would have thought the Sontarans would have a better robot since they always claim to be superior. 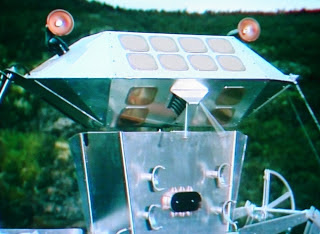 I like The Sontaran Experiment because it is a fun story but also because it is an easy story to watch and a good one to watch if you want to unwind because you do not have to think hard to enjoy it.   It has a classic monster in it and it has Tom Baker fighting Styre in a duel.  It just all around fun to watch and one I really enjoy.
Grade B+