Doctor Who 50th Anniversary: The Ark In Space 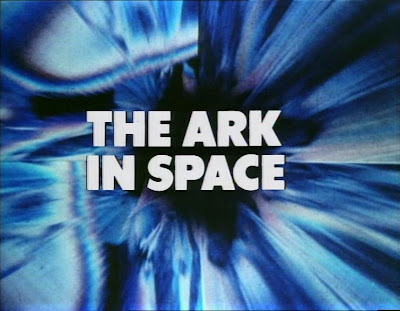 Doctor Who:
The Ark In Space
By Robert Holmes

“Homo sapiens. What an inventive, invincible species. It's only a few million years since they've crawled up out of the mud and learned to walk. Puny, defenseless bipeds. They've survived flood, famine and plague. They've survived cosmic wars and holocausts, and now here they are amongst the stars, waiting to begin a new life, ready to outsit eternity. They're indomitable. Indomitable!”

Instead of a quick trip to the moon thanks to Harry messing with the helmic regulator they instead land on space station Nerva way in the far future.   But The Doctor discovers they are not the first visitors to Nerva as they discover some sheared wires and the oxygen off.   The Doctor gets all this fixed including the defense mechanism which is shooting electric bolts at them. While The Doctor and Harry are pinned down Sarah is resting on a bed that also gets you ready for cryogenic sleep.  After shutting down the defenses the realize Sarah has been transported somewhere and start searching for her when they stumble upon the humans that are asleep waiting to awake to habitat Earth and start life anew. 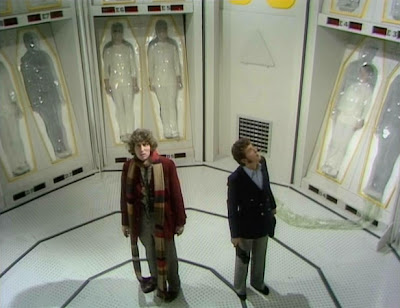 Among them is now Sarah as The Doctor and Harry discover and they are trying to find the device to revive her.  While looking for the device Harry comes upon something really nasty in the storage cabinet.  It’s a Wirrn and it’s a nasty insect like race that absorbs the mind of those it kills or infects.  At this time others have started waking up.  Vira and Noah have woken and they are in charge of reviving everyone.  But Noah is leery of The Doctor and goes off to stop him from restoring the power to Nerva.  After knocking The Doctor out the Wirrn grub infects Noah and thus endangers the revival of the human race as the Wirrn now will take over unless The Doctor can find a way of stopping them. 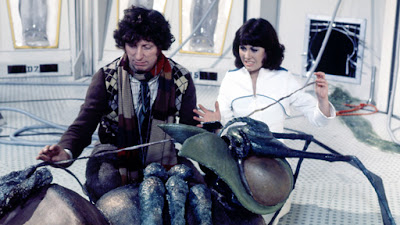 The Ark in Space is one of the best stories Robert Holmes wrote if indeed the best.  It is your classic monster story and what a better monster than the bug like Wirrn. Just look at the way they are and how viscous they act it is scary to watch them as they terrorize the crew of Nirva.  They are a really good creature that it surprises me the Wirrn never made a return on TV.  When I first saw this story all those many years ago the Wirrn freaked me out and I have been a fan of theirs ever since. 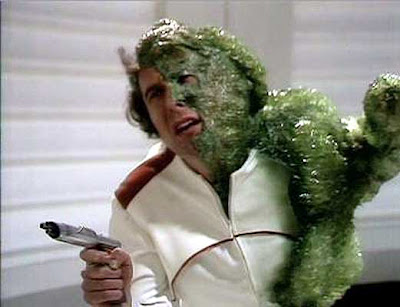 The Ark in Space holds a special meaning to me as it was the first story of Doctor Who that I have ever seen.  I caught a glimpse of the last 2 minutes of Robot and that was enough to get me to tune in the next day to watch The Ark in Space.  By watching episode one I was hooked and watching Tom Baker as The Doctor and swooping in and saving the day how could one not be hooked.  You had this zany hero guy that also had a serious side and was all knowing and had that command of a hero and gave the appearance of someone you could trust. How cool was that for someone at that age looking for something really cool and different to watch on TV as he was just getting into sci-fi. 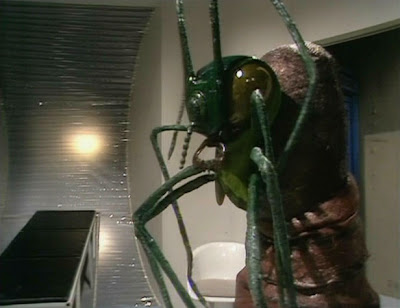 The story was really easy to follow for a 10 year old like myself to follow and The Ark in Space had a cool and freaky monster to grab my attention. The Ark in Space to me will always be a brilliant story and one of my all-time favorites just for that reason.  It was the first one I watched and I will always enjoy watching it and think back to the time when I first discovered Doctor Who. Thanks PBS.
Grade A+
Posted by DR5WHO at 2:05 PM

Email ThisBlogThis!Share to TwitterShare to FacebookShare to Pinterest
Labels: 4th Doctor, doctor who, Doctor Who 50th Anniversary, The Ark in Space, tom baker