Doctor Who 50th Anniversary: Invasion of the Dinosaurs By @Paul_Bowler 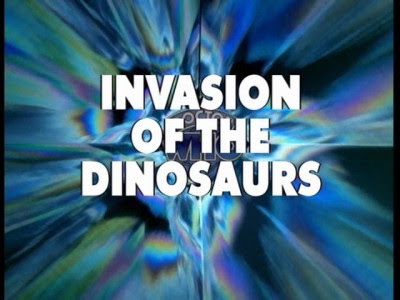 Doctor Who:
Invasion of the Dinosaurs
By Malcolm Hulke
Reviewed By Paul Bowler

MARK: We're on our way. Soon we shall arrive on the planet that's to be our new home.
SARAH: Planet? Spaceship? What are you talking about?
MARK: We left Earth three months ago.


The TARDIS returns the Doctor (Jon Pertwee) and Sarah Jane (Elisabeth Sladen) to Earth, materialising in a strangely deserted London, where the military are struggling to cope with attacks by dinosaurs that have suddenly begun appearing all over the capitol. After being mistaken for looters and arrested by the military, following a close encounter with a pterodactyl, the sudden appearance of a tyrannosaurus rex gives the Doctor and Sarah a chance to escape. Taking refuge from their pursuers, the Doctor and Sarah encounter a Peasant (James Marcus) who has been displaced by a time eddy. Thinking the Doctor is a wizard, the Peasant moves to attacks him, but suddenly vanishes. Afterwards they are found by the Brigadier (Nicholas Courtney) and return to the base UNIT has set up in a school, where they learn more about the dinosaur invasion.

When the Doctor’s attempt to capture a dinosaur is sabotaged he begins to suspect there might be a traitor at UNIT. That traitor is in fact Captain Mike Yates (Richard Franklin), who has teamed up with two scientists, Professor Whitaker (Peter Miles) and Butler (Martin Jarvis), who have been experimenting with a time travel, using dinosaurs from the past to cause panic so the city would be evacuated. Sarah Jane investigates while the Doctor is busy and discovers that General Finch (John Bernnett) and Sir Charles Grover (Noel Johnson) are also involved in the conspiracy, only to be captured herself and taken to a secret underground bunker beneath the city streets, where she later wakes up on board a spaceship bound for a distant planet. 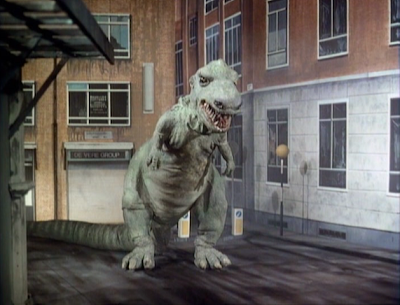 Sarah Jane quickly realizes that the spaceship is a fake. She manages to convince the colonists they have been deceived, that they are not heading for a new “golden age” on a planet free of pollution, and leads them through the air lock and back into the underground base just as the Doctor and the Brigadier attack the secret headquarters. Sir Charles Grover tries to use the time travel device to transport London back to prehistoric times, but the Doctor has altered the controls, and instead it sends Grover and Whitaker back to the time of the dinosaurs. With the crisis over the Brigadier oversees Captain Yates resignation from UNIT, while the Doctor tries to persuade Sarah to go on another adventure in the TARDIS and visit the planet Florana.

Invasion of the Dinosaurs (1974) offers an intriguing slant on the ecological concepts that often featured strongly throughout Barry Letts time as producer of Doctor Who. This six part story is written by Malcolm Hulke, and forms part of Jon Pertwee’s final season as the Doctor. After the tragic death of Roger Delgado and Katy Manning;’s departure as Jo Grant, the UNIT family was slowly beginning to go their separate ways. 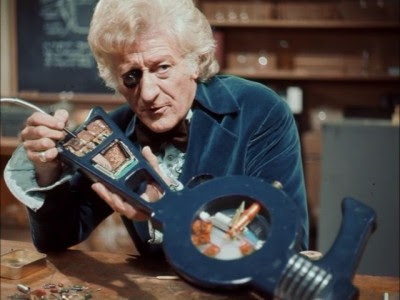 Season Eleven was indeed the end of an era, script editor Terrance Dicks and producer Barry Letts were ready to move on, along with Jon Pertwee, who had also decided to leave the show. Needless to say, Pertwee is on fine form during Invasion of the Dinosaurs, but it is Elisabeth Sladen who really gets a chance to shine here as new companion Sarah Jane Smith, and her skills as a journalists are well used to drive the plot. Sgt Benton (John Levene) is also around to help out; being one of the few officers trusted to remain by the Brigadier’s side; he even lets the Doctor knock him unconscious so he can escape from custody after General Finch frames him for the Dinosaur attacks. We also get to see the Doctor’s new car, the futuristic Whomobile, as it glides around the deserted streets of London. Jon Pertwee had the car specially built for the show, and while it may not be quite as memorable as Bessie, it’s still a very impressive vehicle. 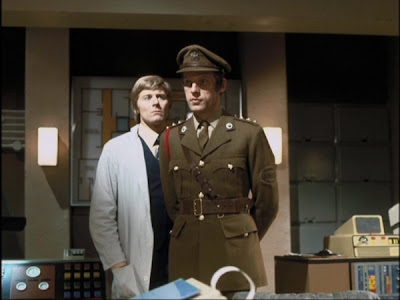 One of the best aspects of Invasion of the Dinosaurs is how Captain Mike Yates turns out to be the traitor who has been working against them. Richard Franklin has some great scenes in this story, even though Mike Yates betrays the Doctor and UNIT, he still rushes in to help the Doctor when his act of sabotage leaves him at the mercy of a tyrannosaurus rex. His desire to help build a better world for mankind is admirable but his loyalty to his friends proves to be his undoing, which is perhaps why the Brigadier affords Yates the chance to resign from UNIT. 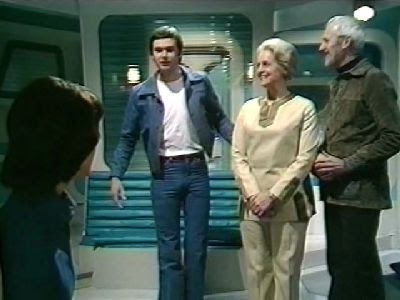 Sadly the weakest aspect of Invasion of the Dinosaurs are the dinosaurs themselves. Having been convinced by freelance effects designer, Clifford Culley that he could produce highly realistic model dinosaurs, Barry Letts and Terrance Dicks went ahead and commissioned the story. Unfortunately Westbury Design and Optical Ltd were unable to realize the demands of Malcolm Hulke’s scripts, leaving the production team stuck with some truly woeful special effects. By then it was too late to do anything about it, although it has to be said that the model backgrounds are highly effective, and the CSO used to overlay them into each scene is quite impressive, it’s just when the dinosaurs arrive that the illusion is completely shattered. 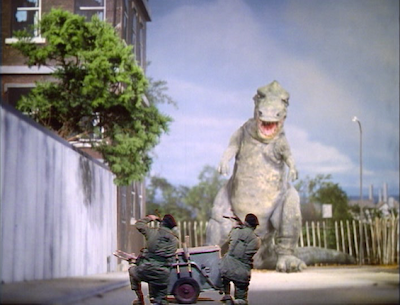 Throughout the course of this story the Doctor and Sarah Jane encounter a number of prehistoric monsters: including a tyrannosaurus rex, triceratops, stegosaurs, brontosaurus, and even a pterodactyl, but it is the tyrannosaurus rex that often earns the most scathing criticism. This puppet is actually far too cute to even be remotely frightening, bobbing around the model sets and flapping his tail, the T-Rex roars at everything and anything - it even seems to say “ROAAARRRR” rather than roaring properly! When the T-Rex is caught and chained up in a disused building, Sarah Jane sneaks in to take some photographs, but the flash on her camera wakes the creature up. This leads to one of the finniest scenes ever in Dr Who as T-Rex goes on the rampage. Well, he does manage to smash a window after a couple of wallops from his tail, and head buts a couple of polystyrene girders, before finally popping his head through a wobbly cardboard wall with a hearty “ROAAAARRRRR” as the Doctor and Sarah escape in a jeep. 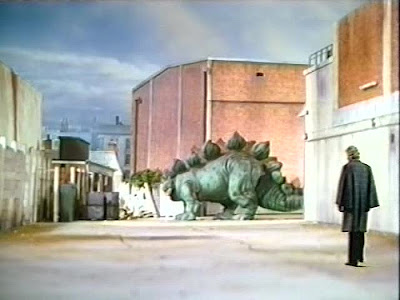 Invasion of the Dinosaurs may be beset by awful special effects but director Paddy Russell more than makes up for these shortcomings, particularly with some great location filming to portray the eerily deserted streets of London. Unfortunately only the black and white version of the first episode of Invasion of the Dinosaurs is currently exists in the BBC Archives, with the rest of the story in colour, this startlingly atmospheric first episode is a real gem. Seeing the Doctor and Sarah Jane return to the evacuated London is quite unnerving: stray dogs roam the streets, a football rests untouched in a children’s playground, a looter gets horribly killed when his car encounters a dinosaur, and the brutal way martial law is enforced is quite unlike anything we have seen before in Doctor Who. The first episode also included a terrifying encounter with a pterodactyl as the Doctor and Sara try to escape in a jeep. It’s a fantastic scene, laced with a real sense of horror as the creature swoops in to attack, smashing through the driver’s window before the Doctor drives the jeep through the lockups doors to escape. 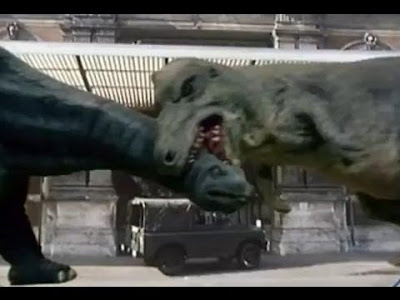 This first episode was digitally remastered and coloured for its DVD release in 2012, although the footage could not be fully restored, so the colours do look a little washed out and unnatural. I prefer the black and white version of this episode (you have the option to watch either version on DVD), Paddy Russell’s direction is superb, and her brilliantly filmed location scenes really enhance the story. 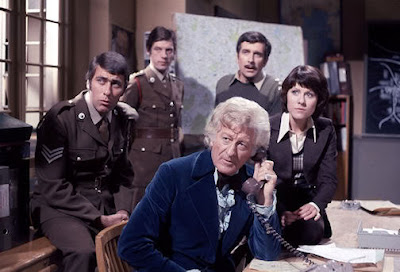 Invasion of the Dinosaurs is a classic case of Doctor Who punching well above its weight and being let down by some truly abysmal special effects. However, it’s funny to think how nearly four decades later Dinosaurs on a Spaceship (2012) would see the 11th Doctor (Matt Smith) facing incredible CGI dinosaurs, albeit in a story that makes the 3rd Doctor’s first encounter with the prehistoric creatures in Invasion of the Dinosaurs look like a masterpiece in comparison. Invasion of the Dinosaurs is a worthy addition to any Dr Who fans DVD collection, the two disk set is packed with extra features, and proves how a good story can outshine the glossy sheen of CGI any day of the week.

Email ThisBlogThis!Share to TwitterShare to FacebookShare to Pinterest
Labels: doctor who, Doctor Who 50th Anniversary, Invasion of the Dinosaurs, jon pertwee