Doctor Who - Farewell Matt: Asylum of The Daleks 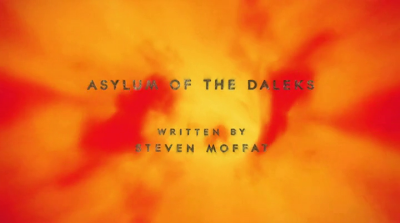 Doctor Who:
Asylum of the Daleks
By Steven Moffat

“You think hatred is beautiful”

Finally after months of waiting, 8 months and some change back in the Fall of 2012 but who’s counting, Doctor Who was back on our television screens with the opener to series 7 Asylum of the Daleks.  This story was heavily teased and was heavily promoted for quite some time it did in fairness have a pretty good surprise in it.   Asylum of the Daleks was written by Steven Moffat and he had been hyping it up.  So did the series opener deliver?  Did it live up to all the hype or does Asylum of the Daleks deserve to be locked up in an asylum itself?

Well for a story to start series 7 it did accomplish what it intended.  It got everyone excited and talking about Doctor Who.  Not a bad thing really.  By the end of the story it sure got people talking.  I’m talking about the surprise appearance of Jenna Louis- Coleman. Yep that’s right the same actress that will be The Doctor’s new companion later in the series.  She is playing a character named Oswin.  Now whether or not this character is the new companion or opens up a big can of worms at the time I was sure surprised that this did not leak out considering all the screenings this story has had. 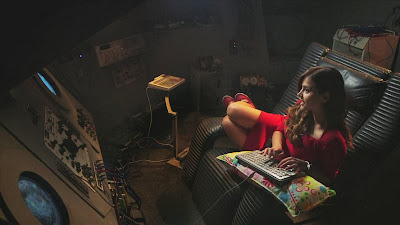 But the overall story is pretty interesting to say the least.  The Daleks want The Doctor to go on the Asylum planet to shut off the force field so they can blow it up because there is something down there that needs to be destroyed and causing the Daleks discomfort.  They want The Doctor to do it because the Daleks are afraid of the crazy Daleks that are down there.  Well this what Jenna Coleman role was the crazy Dalek they wanted removed.  Jenna Coleman was excellent as Oswin and probably one of the high points of this story.  Especially when she realized she was a Dalek and everything started clicking for her.  It was a great scene watching The Doctor getting in touch with the human side of Dalek Oswin when she reverted back to being a Dalek.  I am still amazed that they kept her appearance a secret and her role in the story was really top notch and a good preview of who Clara will be like.

Well for the most part I enjoyed this story.   I’ve been waiting for a Dalek story that hinted at something from the classic series.  While Christopher Eccelston’s “Dalek” was close this one had a feel of a story that could be in the classic series.  If anything it makes up for that poor story “Victory of the Daleks” which just didn’t cut it. Plus it was scary and it ramped up the behind the sofa counter that is for sure.

But this story had a different dimension to it.  First it was about Amy and Rory and saving their marriage or more to the fact getting them to admit their love for one another which they were tricked into doing by The Doctor.  The divorce scenario was kind of a throw away for me.  Was it really necessary to have this going on?  Well I guess when the Daleks were taking away love to make Amy turn into the new version of the Robomen. But a divorce couldn’t they have just had a lover’s quarrel and gone from there.  It’s just another way for Steven Moffat to get the fans into frenzy by throwing something like that into a story when he really didn’t need to. In fact it is something he is guilty of all the time and he’s too talented to resort to devices like that.

I liked the feel to this story.  While not the strongest story it was a story that wasn’t complicated and got the viewer bogged down with lots of complicated plot devices.  I liked how it opened up on Skaro.  Skaro is the Daleks home planet.  We haven’t seen Skaro in the new series yet and it was good to finally see what it looked like after the Time War.   I also liked the new slaves of the Daleks or the new Robomen I guess.  That was pretty cool to see and something I’m glad to see brought back.  I also liked the asylum but it is too bad that it was hard to recognize the classic Daleks.  I did recognize a few of them and yes the Special Weapons Dalek was there for all to see.  Plus it was great to hear the classic Dalek control room noise again.  That noise is classic and glad they brought it back.

The human Dalek was a pretty good idea and the clues were all there from the beginning.  It was a pretty good concept and something different which I thought was executed pretty well.  It is good to see them try something different as with the Daleks there isn’t much left to do with them.  Not so sure I like the idea of the Daleks not knowing who The Doctor is anymore.  Having their memory wiped, I don’t know, is something that will take some getting used to.

Was Asylum of the Daleks the best story ever? No, but it was one of the better Dalek stories of the new series, and of the classic series for that matter, as it was pretty enjoyable and did try to do different things and it sure set things up for later on.  The acting was pretty good and it was nice to see Matt Smith bring a darker edge to his Doctor.  While a good story with lots of positives things going its way Asylum of the Daleks did start the series 7 off on a good note and sure added to a lot speculations by the fans going forth.
Grade A -
Posted by DR5WHO at 5:15 PM

Email ThisBlogThis!Share to TwitterShare to FacebookShare to Pinterest
Labels: 11th Doctor, Asylum of the Daleks, doctor who, Matt Smith