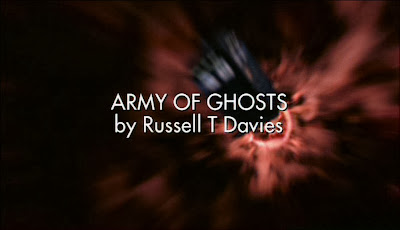 Doctor Who:
Army of Ghosts/ Doomsday
By Russell T. Davies

“This is the story of how I died.”

The Doctor and Rose return home to discover that England  in fact the whole world has been invaded by ghosts.  The Doctor doesn’t believe it is ghosts in fact he thinks it is something else entirely and he finds out by trapping one that it is indeed a bit sinister.  The signal for the ghosts appears to be coming from the Torchwood building. Torchwood have been expecting The Doctor for some time and when he arrives give him a round of applause before keeping him at armed guard for security purposes. 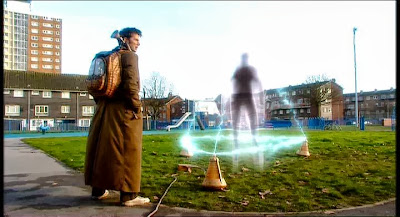 Something sinister is lurking inside Torchwood Tower.  Something that has broken over from their Earth to ours.  It appears that the Cybermen have come across dimensions when a mysterious void ship broke through the void into our world.  The Doctor is confused as to how this could be and wasn’t even sure it was possible.  Then all hell breaks loose as cybercontrolled Torchwood employees activate the dimension shift to full power allowing the Cybermen to invade.  What is worse is that also activated the void ship and out of it comes the Daleks and now The Doctor has two evil forces to contend with to save the Earth from destruction. 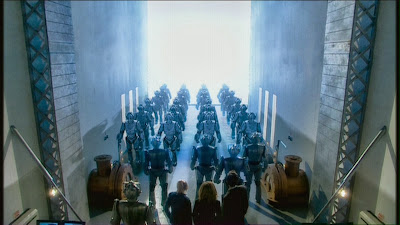 This is the story in which Russell T. Davies delivers the goods.  Cybermen and Daleks in the same story and they are fighting each other.  Wow this is a fans dream.  Having the two best enemies of The Doctor battling it out was something fans have discussed and dreamed about forever.  At least I have and I am sure I’m not the only one.   So many great moments in this story that makes you grin all over.  But with all that fanwank in this story was there a story to complement all the excitement. 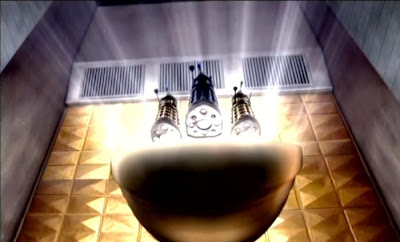 The Army of Ghosts sets up the events and action perfectly.  The plot was so intense that it kept you riveted to every scene.  For example who are the ghosts and what is in the void ship in Torchwoods secret lab.  This story also sets the wheels rolling for Rose’s departure, for now, from the show.  Or I guess from being a regular as she does come back later on.  You get a hint that something devastating is going to happen to her right from the beginning.  You kinda feel sorry for her but not really when she acts like selfish and very snobbish and self-centered towards her mother in the TARDIS. That scene alone sums up the character of Rose.  Behind it all she really isn’t the nicest person towards her family and friends. 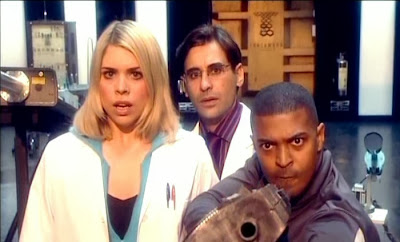 Army of Ghosts had some good moments from the reveal of the Daleks in the void ship to the Cybermen lurking around Torchwood but the stupidest was the Ghostbuster homage.  That was pretty stupid and did not really project well.  I will say the funniest was when The Doctor realized that Jackie was still on board the TARDIS when they dematerlized.  One of the best lines ever was Jackie saying “If we end up on Mars I’m going to kill you.” 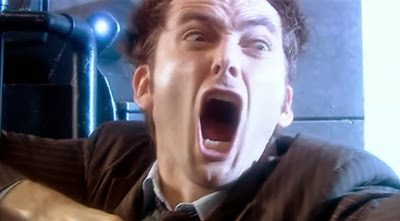 Now Doomsday was the showdown of all showdowns between the Daleks and the Cybermen.  It was pretty cool seeing the confrontation especially the verbal confrontation between them.  Best line is when the Dalek tells the Cybermen they are better at dying than the Daleks was just priceless.  Doomsday is of course the story where Rose leaves in what is one of the more gut wrenching scenes.  I would have preferred if she got sucked into the void as that would have been more devastating for The Doctor and would have been interesting to explore the ramifications of that on The Doctor but having her getting exiled in a way on the alternate Earth is just as sad.  The farewell was pretty sad also with The Doctor saying goodbye to Rose from a hologram image and having the power cut off before he can say what he wanted to say was emotional and one of the sadder scenes in new Who. 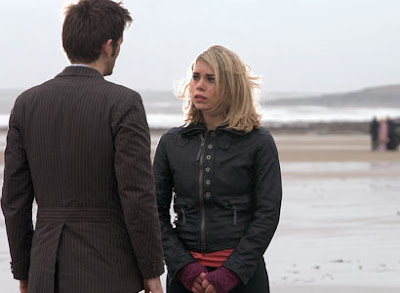 The overall story was ok as it was mainly an action story with the Rose bit at the end.  It is a favorite of mine as I loved seeing the Daleks and Cybermen together and watching The Doctor desperately come up with a plan that would save the Earth.  It is a fun story to watch and if you can get past the Rose bits it is very entertaining.  This story was a great end to David Tennants first season as the Doctor which was a pretty good season itself.
Grade A
Posted by DR5WHO at 7:57 PM

Email ThisBlogThis!Share to TwitterShare to FacebookShare to Pinterest
Labels: 10th Doctor, David Tennant, doctor who, Doomsday, The Army of Ghosts